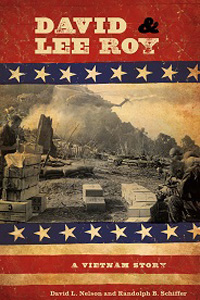 Through the book, Nelson wants readers to know how much Herron loved his country, family and the Marine Corps.

Following an investigation into the heroic wartime death of his close friend, a former Red Raider took his memories to the pages in a book recently published by the Texas Tech University Press, “David and Lee Roy: A Vietnam Story.”

When David Nelson, co-author, and childhood friend, Lee Roy Herron, joined the Marine Corps as officers in the 1960s, life took them in different directions. Nelson served as a JAG officer while Herron fought and lost his life on the front lines of the war in 1969.

Refusing to let the memory of Herron die with him, Nelson set out on a quest to find out what really happened in the last days of his close friend during the Vietnam War.

In Honor of a Veteran

After years of searching through military archives, speaking to friends and family back in West Texas, and visiting Vietnam battle sites, Nelson discovered truths that caused him to rethink the nature of fate, friendship and heroism.

Following his investigation, Nelson spearheaded a memorial ceremony for Herron on March 3, 2001, in their hometown of Lubbock, and the mayor declared it Lee Roy Herron Day.

“We had about 150 people attend the ceremony, which was held in the beautiful Hall of Nations,” Nelson said. “We had numerous speakers, including Marines who served with Lee Roy, high school friends, Lee Roy’s sister Jane, and then-Chancellor John Montford.”

At that ceremony the Lubbock High School class of 1963, of which Herron served as student body president, presented an endowed scholarship in his name to the Vietnam Center at Texas Tech. Today, this scholarship now approximates $250,000.

Two individuals in attendance at the ceremony were Randy Schiffer, former Marine and professor at the Texas Tech University Health Sciences Center, and Jeff Whitley, then a Texas Tech development officer.

It was decided. Whitley did some interviewing and helped scan old photos, while Nelson and Schiffer combined their skills and resources to write the book.

“It is my desire for as many people as possible to know about Lee Roy—his selfless heroism in Vietnam, his love of country and the Marine Corps, and his love of God and of his family,” Nelson said. “He truly was an amazing man who had a positive influence on all. The book also reminds people that the overwhelming majority of our veterans who served in Vietnam did so honorably. They should have been honored and respected just as our veterans of today are.”

Nelson and Schiffer will be available to sign copies of the book at 7 p.m. on Sept. 30 at Barnes & Noble at the South Plains Mall and between 10 a.m. and 2 p.m. on Oct.1 at United Supermarket at 50th Street and Indiana Ave.