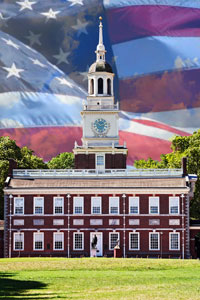 The Constitution was signed at Independence Hall on Sept. 17, 1787.

In honor of the week when the Constitution was signed more than 200 years ago, the Texas Tech University School of Law and the Department of Political Science are sponsoring a panel of experts to discuss constitutional issues in immigration.

"In the last couple of years, the subject of immigration policy and the Constitution has gained more visibility, as more and more state governments pass laws attempting to regulate or police undocumented immigrants," said Mark McKenzie, assistant professor of political science. "In these attempts, state governments have begun clashing with federal authorities over control of immigration policy. Recently, a federal judge in Alabama blocked an Alabama law directed at undocumented immigrants. Meanwhile, some politicians have promoted amending the Fourteenth Amendment to do away with birthright citizenship."

Federal law and regulations by the U.S. Department of Education require federally funded schools to provide an educational program about the Constitution each year on Constitution Day. The Constitution was signed Sept. 17, 1787. Former West Virginia Senator Robert Byrd, who always carried a constitution in his pocket, was largely responsible for getting this law passed in 2005.