Ralynn Key Kirkpatrick knew from early on she wanted to be Texas Tech's most-recognized mascot. 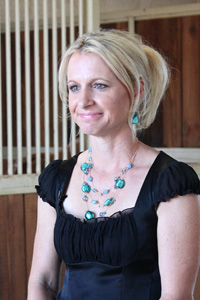 Ralynn Key Kirkpatrick’s face lights up when she remembers her Light Show ride on a fall night in 1991.

“My most favorite memory that stands out in my mind was the light show. I’m not sure they do that anymore,” Kirkpatrick said. “I had a lighted costume. My hat was lit up, my cape was lit. We had a battery pack that we had to tie on to the saddle, under my cape – probably 35 or 40 pounds – and Midnight Raider hated that. It was real hard to get it tied on because he wouldn’t stand still.”

Kirkpatrick tells about Blaine Lemons, the rider previous to her, who was her helper, trying to get the battery pack tied on to the saddle before her cue to come down the ramp and take off.

“We finally got it just in time, as they started the fight song. I came down the ramp, and it was pitch dark. I couldn’t see a thing other than just blurs, images going by me. I had the reins on the horse’s neck and I had my guns up – both hands out, and that was the scariest moment of my entire life. But I just kept thinking ‘the horse can see. I can’t see, but he can see.’ So I just trusted Midnight Raider. And I was thinking, ‘please God, don’t let anyone step out in front of me.’ That was the scariest moment of my life but also the most exciting and the most memorable.”

Following the Trail to her Dream

Kirkpatrick, the Masked Rider in 1991-1992 and also the 30th rider, grew up on a ranch in Borden County, near Gail. She rode horses her whole life and participated in junior rodeos.

“It was a dream of mine from the first Texas Tech game I ever saw to be the Masked Rider, so I set that goal. I was probably 7 or 8 years old, about the ages my children are now. I wasn’t even interested in the football game or the cheerleaders – I was just focused on the Masked Rider,” Kirkpatrick said.

Kirkpatrick always knew she’d go to Texas Tech, and when she was a junior, and had enough hours to actually try out, she did that – and says she was fortunate enough to be named the Masked Rider. She also was on the rodeo team and made the College National Finals her last two years at the university.

“I was a barrel racer. I still do that today, and so do my kids (Krece, 8 and Zaran, 5). My mom graduated from Texas Tech, and she was on the rodeo team as well; so we went to the games because of her relationship to Tech; and my cousin was actually the head coach at Baylor – Grant Teaff. That’s why we went to the Baylor game every other year and watched Tech play. After I saw the Masked Rider, I wanted to keep going to the games, so we saw a lot of Tech football when I was a child.”

In fact, Ralynn was the first – and maybe only – Masked Rider to travel to the Baylor game, because of her relationship to the famous Baylor head coach.  “He got it worked around where I could go down in the stadium and take the horse.”

Kirkpatrick was the fifth rider to saddle up Midnight Raider. By the time she got him, she said, he knew what to do, and all she had to do was be able to ride. “We developed a special bond. You had to put your trust in the horse, because he was in control that night of the light show, and I just had to have faith that he would take care of me, and he did. 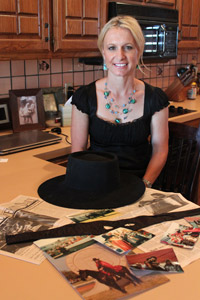 Kirkpatrick said her time as the Masked Rider is something she would not trade for anything in the world, and watching the rider still gives her chills.

“The neat thing about Midnight Raider, he went one more year after I was the rider, and they retired him in 1993. They took applications to see who would like to give him his retirement home, I applied, and I was chosen to be the one to retire him. He lived at our ranch in Borden County, and he was probably 26 or 27 when he died. He had a great life of retirement.”

Ralynn graduated with her degree in business education in 1992 and in 1995 married her childhood friend, Wil Kirkpatrick, also a Texas Tech graduate (animal science 1988). Ralynn taught school for 10 years, at International Business College in Lubbock, Crosbyton Middle School and at Post High School. The couple still competes and raises horses on their ranch near Spur. But she says she’ll always prize her days as Texas Tech’s most-recognized mascot.

“When you think about being one of only 50 people who have been the Masked Rider, it is an accomplishment – it means so much,” Ralynn said. “We were all on the field for the 50th rider’s first ride. And it was the same reaction by all the Masked Riders when we saw Bradley make his first run and lead the team onto the field – we all looked at each other, and we all said, ‘It still gives me chills.’ It’s something I would not trade for anything in the world and it’s one of the most special memories that I have, and I cherish it.”

The Masked Riders and their hometowns from the 1990s: