The team excelled in all divisions, winning the contest by 32 points. 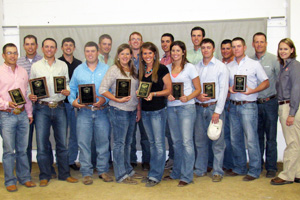 Coach Rathmann said not only does the team excel during the contest season, but also in the classroom.

The Texas Tech livestock judging team won its first contest of the fall by 32 points Tuesday (Sept. 13) in Austin, Minn. The contest, which consisted of swine evaluation only, was hosted at the 65th National Barrow Show® and is recognized by industry leaders as the premier swine judging event in the nation.

Other teams finishing in the top-five overall included Purdue, Oklahoma State University, the University of Illinois and Iowa State University. In the reasons division, the Red Raiders also finished first with a score of 930 points – five points ahead of Purdue.

“This is the first time that Texas Tech has won the National Barrow Show in its long history. I am proud of these students’ performance and the manner of integrity in which they represent their university,” said the team’s coach Ryan Rathmann, an assistant professor in the Department of Animal and Food Sciences.

“They are an exceptional group that consistently excels both in and out of the classroom,” Rathmann said. “In addition to their achievements, the students on the team gained invaluable exposure to progressive swine production systems across the Midwest and extended their network of contacts in the swine industry.”

Along with Rathmann, the team is coached by graduate student Bryan Bernhard.

The team will continue to contend at contests across the United States this fall before competing for the national championship Nov. 14 at the International Livestock Exposition in Louisville, Ky.