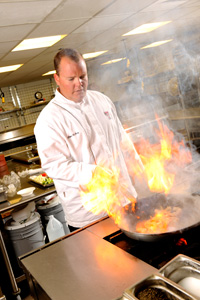 The next step for McMurrey is helping the university receive the award of excellence from the American Culinary Federation for having nine certified chefs on campus.

The not-for-profit chapter consists of 29 members and is devoted to performing volunteer work and student success. McMurrey, nominated by other area chefs for the award, will continue on to compete for the Chef of the Year central region title, which includes 96 chapters.

After working in the food service industry for more than eight years, McMurrey realized culinary arts was the profession he wanted to make a career. The Houston native graduated in the top 10 percent of his class at the Culinary Institute of America in Hyde Park, N.Y. After winning numerous competitions and working under Certified Master Executive Chef Ernst Gruch, McMurrey arrived at Texas Tech in 2005.

McMurrey implemented the Smart Choices/Wellness program and conducts the training, product sampling, research and development, catering, and recipes for the university. He said his team does a little bit of everything, but especially tries to fill the wants and needs of the students on campus.

“There are certain diet trends we have to keep up with, such as gluten-free and low or no carbs,” McMurrey said. “We also have our Smart Choices website which has information on allergies and special diets, as well as tools and calculators for calorie measurements.”

Recently, the Texas Tech Top Tier Catering kitchen has become an ACF-certified test site, which McMurrey hopes to use to develop his employees into certified culinarians and for himself to achieve his certified culinary educator and certified executive chef designations.

“Every two years I choose six cooks to go through a two-year course on campus. If I can get this class approved with the ACF, we could obtain our certifications,” he said. “When Tech gets nine certified chefs on campus, it can get the award of excellence from the ACF, which at this time the only other school in Texas that has that is Rice University. We are working for this."

The Department of Hospitality Services will challenge students to become active participants in their individual learning experience by enriching each guest's experience through excellence in services, staff development, technological advancements, cutting edge facilities, sustainability, and performance.

Check out the many dining locations across campus.