The affordable devices can enable those with hand-mobility challenges to use their eyes to navigate the Web. 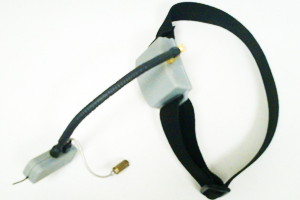 The device studies the pathways of users’ eyes and allows researchers to understand how viewers look at web pages, as well as other material.

If necessity is the mother of invention, researchers at Texas Tech’s Usability Research Lab (URL) may have inadvertently given birth to twins.

After several years of research, software writing and prototype creation, researchers have created a device that can track eye movement at a price-point far below the industry standard.

But at the same time, the device can be used to help people with hand-mobility issues use their eyes to move a mouse around the screen, said Brian Still, lab director.

The EyeGuide™ Eye-Tracking System began as an idea to meet a goal in the Usability Lab, Still said. Eye-tracking devices map the pathways of users’ eyes and give researchers an idea how viewers look at a web page or other material. This allows researchers to follow user trends and improve design to make the page more effective.

Because conventional commercial eye-tracking devices can cost as much as $30,000 to $40,000, most academic laboratories can’t afford them, Still said. Their new eye-tracking device is created from an inexpensive camera and wireless headset. Less bulky than conventional models, it will retail for less than $1,500, and can be used by people who wear glasses.

“We made it for ourselves in our lab primarily because we couldn’t afford existing technology,” he said. “Eye tracking is important for usability researchers, because it tells us exactly what users are looking at better than any other technology.  We were asked to do eye tracking in 2008 and 2009 when it became really popular, and we couldn’t afford to do it. I could hire two research assistants for an entire year for $30,000, which was not something I was going to forego to buy technology. As we were doing this, we began to realize we would not only be able to create something just for us, but also it was possible that it had commercial value to others.”

As Still tried to find a cheaper solution to eye tracking with Nathan Jahnke, a doctoral student in the technical communication and rhetoric department and the lab's assistant director, they began looking into existing free eye-tracking software online in January 2010. 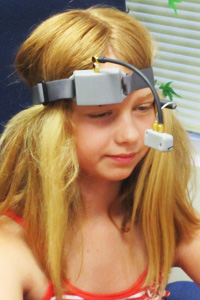 Both the EyeGuide™ and EyeAssist™ can help users overcome financial, physical and even technological obstacles.

Both realized that reshaping code for the lab's purposes wasn’t going to work. Jahnke took the lead, spending five months researching and writing an alternative eye-tracking software program from scratch.

“Everything was completely new to me every day,” Jahnke said. “It was the single greatest educational experience in my life. I was completely unprepared for it. It was great.”

After creating the software, the team decided to make an invention disclosure to Texas Tech’s Office of Technology and Commercialization with the hope of having an outside company license and sell it.

More Than An Eye-Tracking Device

However, Still said he worried about the invention getting beaten to market, so the team created Grinbath LLC, a startup business they created to license EyeGuide™ and market it themselves.

The team raised venture capital from local investers to develop a prototype. Grinbath debuted EyeGuide™ at the Useability Professionals Association Conference this June in Atlanta. The company began selling EyeGuide™ in September.

As Still and his team began testing the boundaries of the EyeGuide™, they found it could meet other applications as well.

“The same thing that allows the eye to be tracked also can, with additional programming, allow the eye to move the mouse,” Still said. “So, we have not just invented an eye-tracker. By the end of this year, we will have a prototype ready for something called EyeAssist™. This device will offer millions of disabled users who have limited or no functionality in their hands the ability to navigate the Web or use desktop software with just their eyes.”

Because the eye is so much faster than the hand, the device also may have applications for gamers to increase the speed and proficiency of their game

“Game playing is enhanced in a way that’s almost not even fair anymore,” Still said.

As former director of the Usability Lab, she said the time was ripe for a product such as EyeGuide™ and EyeAssist™.

“These products are about efficiency, affordability and accessibility,” Carter said. “If we’re talking about the visual medium, what the subjects are looking for is a great proxy for their problem-solving. And for less than $1,000, any lab with some laptops and some time and expertise can double their ability to do research with EyeGuide™. And EyeAssist™ is an absolute game-changer. It has the potential to overcome financial, physical and even technological obstacles. Texas Tech researchers are making this happen, and that’s a pretty cool thing.”