The performance was highlighted by the tournament championship won by 2010 national champion Adam Testerman and new partner Joey Donaghy. 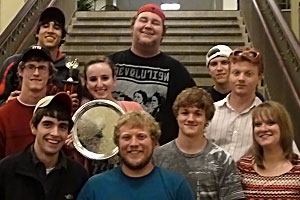 The strong combined performances earned Texas Tech Debate its first ever sweepstakes championship at William Jewell, an award given to the top school at the two tournaments combined.

The Texas Tech debate team opened its 2011-2012 season with a win and was named the top overall school at two tournaments held Sept. 16-18 at William Jewell College in Liberty, Mo.

The performance was highlighted by the tournament championship won by 2010 national champion Adam Testerman and new partner Joey Donaghy.

“You cannot ask for a better opener to the season than we just had,” said Joe Gantt, head coach for the team. “Every member of our team contributed to our sweepstakes win, from our most experienced debaters to our newest debaters. We have been working incredibly hard over the last month to get ready for a competition as difficult as we saw in Liberty, and the results show that the hard work paid off. I believe this will be a special year for Texas Tech debate.”

The William Jewell College tournaments serve as the kickoff to the parliamentary debate season. Sixty teams representing schools from 11 states attended the events.

The competition was no problem for Donaghy, a sophomore communication studies major from Coppell, or Testerman, a senior communication studies major from Springfield, Mo. The pair lost only one debate and won nine on their way to the championship of the first tournament – the Cardinal Classic. The highlight of the tournament was a final round win, beating a strong team from Washburn University, which was the 2011 national runner-up.

The second tournament continued Texas Tech’s success, as Donaghy and Testerman finished in third place, losing to host William Jewell in the semifinals. Elliott and Wesley again placed second in the junior varsity division, and Kennedy and Seymore as well as the team of Sean Riegert, a senior political science major from Clear Lake, and Lauran Schaefer, a senior communication studies major from Sonora, advanced to the elimination rounds reserved for the top teams at the tournament.

The strong combined performances earned Texas Tech Debate its first ever sweepstakes championship at William Jewell, an award given to the top school at the two tournaments combined. Additionally, Donaghy, Riegert, Schaefer, Seymore and Testerman were all named among the top 20 individual speakers at the tournaments.

The team will travel to the United States Air Force Academy tournament next, held Sept. 30-Oct. 2 in Colorado Springs, Colo.