Allen T. McInnes will continue serving as dean through the academic year. 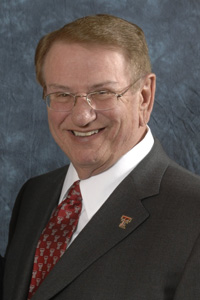 As dean, McInnes successfully led a fundraising campaign to build a new high-tech, energy-efficient business school that will open January 2012.

Rawls College of Business Dean Allen T. McInnes has announced his plan to retire from Texas Tech. He will continue serving as dean through the current school year and possibly until a new dean is named.

McInnes was appointed dean in 2001 following a distinguished career as an oil industry executive and community leader in Houston.

During the past decade, McInnes’ leadership has led to increased student standards and national recognition for many of the college’s programs. During his tenure, the college has expanded its curriculum to include energy commerce, health organization management, entrepreneurship and an executive-style MBA program.  He established the Rawls Career Management Center and initiated an alumni and industry advisory council.

In addition to raising the profile of the business school, McInnes spearheaded a successful fundraising campaign to build a new building for the business school that will open to students in January 2012. The building’s innovative design features high-tech amenities, energy efficiencies and good stewardship of environmental resources. The new facility is the first on campus to receive a LEED Silver designation – a U.S. Green Building Council Leadership in Energy and Environmental Design label. The state-of-the-art facility complements the college’s legacy of rigorous academics that cultivates leadership.

Provost Bob Smith announced that Linda Hoover, dean of the College of Human Sciences, will lead the yet-to-be-named search committee that will include representation from the Texas Tech Board of Regents, faculty and alumni from the Rawls College of Business advisory council.

McInnes is considering teaching opportunities at the business school once he leaves his administrative post.

“Lubbock is a wonderful community and my wife, Missy, and I have made lifelong friends here,” McInnes said. “The best part of being Dean has, of course, been the people. It’s been a great ride.”