School of Law graduate Bob Black leads 130,000 lawyers as president-elect of the State Bar of Texas. 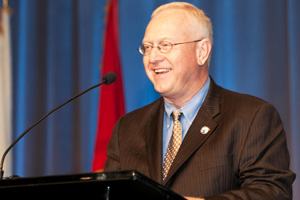 As president-elect, Black advocates legal education at a cost-effective price and works to restore the law profession's reputation.

Raised in a home where law enforcement was well respected and a college degree was encouraged, Bob Black followed a path out of his hometown of El Paso that played to his strengths.

The civics advocate, animal lover and American history enthusiast recently was sworn into the second phase of his State Bar of Texas presidency. The pre-presidency, president-elect and post-presidency positions require Black to be present in Austin, but he still practices law in Beaumont and Houston, as well.

His new position works with every aspect of practicing law, from licensing to discipline. One major issue he manages is continuing legal education at a cost effective price.

“I am working hard to restore the law profession’s reputation and to teach about the important role that lawyers play in our democracy,” Black said.

Before Black took on this three-step leadership role, he was winning debate competitions and becoming the first person on his father’s side of the family to attend college.

Black finished the final debate of his senior year of high school on the Texas Tech campus. Excelling early and finishing strong, he won the district title in El Paso in the persuasive speaking category and regionals were at the university.

Staying home for his undergraduate degree, Black obtained a bachelor’s from the University of Texas at El Paso on a full debate scholarship. His first college competition took place back at Texas Tech.

Through the competitions, Black became familiar and fond of Lubbock and the Texas Tech campus.

“One of the cool things about debate and speech competitions is they put you in buildings all over campus, and I really liked Texas Tech and had my eye on it from there on out,” he said.

Black majored in history and seriously considered becoming a history professor, but his family urged him to pursue law. His father worked with the U.S. Border Patrol and his mother negotiated term contracts with military doctors.

“My dad was a great believer in the rule of law and my family respected the profession, so both my parents supported the idea of attending law school,” Black said.

“Lubbock was the right size for me, and although law school is competitive, it can also be fun,” Black said. “I thought the faculty made a good effort to reduce the stress and be accessible.”

Quick Shift from Student to Professional

During his law school summers, Black clerked for Mehaffy Weber law firm in Beaumont in wills and trusts topics. He soon found he didn’t like the subjects and decided to be a trial lawyer. 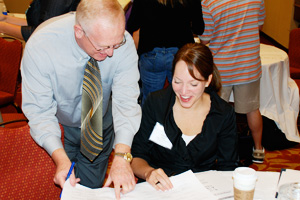 Black says law school students are rewarded for learning the law, but in order to be successful one must apply the law successfully.

In the spring of 1980, Black graduated from law school. In July he took the bar exam on a Thursday, drove from Lubbock to Beaumont on Friday and started working for Mehaffy Weber on Monday. He quickly realized the shift a law student goes through after the days of four-hour tests and into real-world case situations.

Black continued as a litigator for more than two decades before changing exclusively to arbitration and mediation. Litigation fit well with his competitive nature, but as negotiation became more popular in Texas, Black enjoyed bringing opposing parties to a resolution.

“I like problem solving and how mediation provides the instant opportunity to resolve a conflict,” he said. “The problem is there for that day, and it’s your job to join the two sides.”

“Plus, I like to haggle too, so it suits me well,” Black said, laughing.

Now, as the managing shareholder for Mehaffy Weber, he works to hire and create an atmosphere of lawyers at the firm who have the potential to be successful.

“What I look for in a lawyer is brains, good character, and the ability to work with others,” he said. “If they just show up ready to work hard and have those, they’ll be good.”

Four-legged Friends and Some Mystery

But practicing law isn’t Black’s lone passion. In 1983, three years out of law school, he became the president of the Humane Society of Southeast Texas. He held the title for seven years.

The proud owner of three Scottish Terriers, Black again credits his family for his compassion for animals.

“I trace my love for animals back to my paternal grandmother,” he said. “She was an animal magnet.”

Black also has a strong interest in reading about the founding fathers, Abraham Lincoln and Franklin Roosevelt. He’s a fan of author Robert B. Parker.

“I must confess, I also like a writer by the name of Janet Evanovich, who writes hilarious mysteries,” Black said. “A friend introduced me to her books, and I was hooked. I think I read one through seven of her series on one business trip."

That’s the Way the Law Works

As president-elect of the State Bar of Texas, Black leads 90,000 active and 40,000 inactive lawyers and believes everyone in Texas should understand what their job entails.

He said many children are not taught civics anymore, and that they don’t necessarily understand the three branches of government are independent and co-equal.

“We have worked on an elaborate program to teach about the judicial branch of government and the role of lawyers,” Black said of the State Bar of Texas. “We’re going to take it statewide with teachers and students.”

The program, called “Oyez, oyez, oyay!,” a phrase said when a judge enters a court room,  is an interactive website where kids can play games while taking sides of a court case. A site also will be created for adults called “Making the Case.” This site will feature lawyers who have made a difference in the profession—some famous, others people have never heard of.

“Thirteen of our first sixteen presidents were lawyers,” Black said. “Most of the founding documents were written by lawyers and still 200 years later our lives are impacted by their words. I will work hard to grow the profession.”

As leader of the fifth largest organization of lawyers in the United States, Bob Black's goal is to focus on what he calls the basics: service and education.

The mission of the State Bar of Texas is to: