A little girl's fear of hospital equipment inspires her parents to develop their business, ivPolePals. 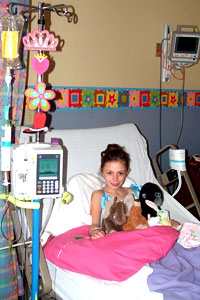 Alex Salser strives to keep a positive attitude knowing that her experiences led to the creation of ivPolePals.

With their white walls, eerie atmosphere, long halls and big words, hospitals can be a scary place for some people. In a children’s hospital, the environment can be more colorful and inviting, yet rainbows and stickers don’t always take all the pain away.

For Alex Salser, an 8-year-old girl battling an incurable disease, she needed a friend during her continuous hospital visits when she was younger to comfort her from a sterile equipment piece that frightened her.  Her mother acted with maternal instinct and together they created a diversion tool from notebook paper that humanized the IV pole that scared Alex.

Despite Alex’s diagnosis, she looks back on her experience as a situation that led to her family’s business, ivPolePals, which could help other patients battling diseases like hers. She sees the positivity in her circumstances and her parents see a world of difference one piece of paper can make.

In Alex’s world, a trip to the hospital once a year for a few days is a healthy period and a stomach virus means instant hospitalization. Any illness that prevents Alex from keeping food in her body is a potential life or death situation if an IV is not inserted in a timely manner.

Deric and Lynne Salser, a 1993 architecture graduate and a 1992 business graduate, welcomed their daughter into the world in the summer of 2002 after a distressing emergency caesarean section. Yet, 36 hours later Alex suddenly stopped breathing and was rushed onto life support. Tests revealed she had LCHAD, a metabolic disease that affects only one or two dozen children in America every year.

“This disease means that Alex cannot process stored fat or turn it into energy. Therefore, she cannot go without eating,” Deric said. “Even today, I’m still getting up at 1 a.m. and feeding her a formula. She will have to manage this for her entire life. 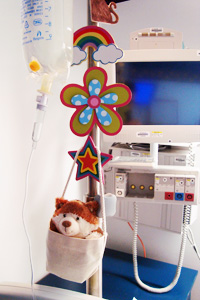 In the beginning, Alex’s hospital visits were frequent, and during a nine-month period she spent 40 non-consecutive days hospitalized. Today, visits average about one to two times a year for four to five days at a time.

Lynne said by the time Alex was 3 years old she was a veteran patient who knew the routine, but was apprehensive when it came time to insert her IV. One visit when Lynne was trying to get Alex to walk around, a creative thought led to an idea Deric would later develop.

“I knew that we just had to make friends with this IV since hospitals were a lifestyle for us, not just a one-time instance. So, I had a journal I carried around, and I took a crayon and drew a face then cut it out and taped it to the IV pole. With help from my daughter, his name became ‘Watery,’” Lynne said.

Watery totes a princess tiara and now shares space with another character, “Flo,” a brown-eyed puffy-lipped face. When Lynne realized the significance of both paper characters, she had them laminated and they became a tradition for Alex’s hospital visits.

Deric said he quickly saw a change in his daughter’s reaction to the IV. The character created a distraction from the process.

“There were times when Alex had to be restrained and held down when inserting her IV. It was not a good scene,” he said. “For her, ‘Watery’ personalized the object she was so afraid of.”

Alex and Lynne’s pole character creations gained much attention from doctors, nurses and other patients who told Deric he should market them and possibly create a business. He kept the idea for two to three years, but when the economy crisis of 2008 hit, he devoted his design experience and skills to the creation of the ivPolePals business.

Lynne said she doesn’t remember the exact time the business started forming, but she remembers it was during Texas Tech’s 2008 football season.

“We were at the hospital and Tech was playing UT—the one where we won at the end. Our nurse was from UT and we were moderately obnoxious that day,” she said. “I remember Deric showed up to hospital with a lot of clips and ideas on how to form the product. That was the time he was working on it intensively.” 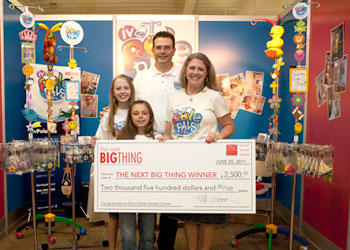 ivPolePals won “The Next Big Thing” Contest, sponsored by the Dallas Market Center.

The ivPolePals business began like many start-up companies, headquartering straight out of the Salser’s garage in Sunnyvale. Deric received advice from VantagePoint, a business-to-business marketing agency located in Greenville, S.C., saying his products had potential for good business. Before he knew it, the product line was awaiting patents and had 40 products selling across the nation.

ivPolePals has adapted its products from the paper origin to plastic and painted wooden shapes with patent-pending clips that attach directly to the IV pole. The product line includes animals, sports themes, dry erase marker boards and picture frames, among others.

A turning point for the business came June 25 when ivPolePals won “The Next Big Thing” Contest, sponsored by the Dallas Market Center. The prize package was worth $15,000, including $2,500 in cash and $12,500 for consultations with experts in branding, public relations and merchandising.

“Winning has opened doors for possibilities I never imagined. Immediately the day following the announcement, the phone was ringing off the hook from national sales representatives that wanted to sell our product,” Deric said.

The business also has reached international markets selling to Canada, Europe and Australia.  For now, Deric said he is taking the crawl-before-you-walk and walk-before-you-run approach. His goals, however, still are set high.

“We want to put an ivPolePal in every hospital room in the world. I know that sounds crazy to say, but some days you can’t buy a smile in a hospital room and the ‘pals’ bring a friendly experience,” he said.

Lynne agrees with her husband and hopes adults and children alike can benefit from the pole pals.

“As a mom, I believe the hard things we have to endure can be made better if you just dress up the situation and make things a little cuter,” she said. “The pole pals can give you the courage to keep going.”

After recently meeting with an ambassador for the ABC Television show “Shark Tank,” the business is considering applying for a possible appearance on the series, where billionaire investors buy or partner with your company to expand the business. For more information or to purchase ivPolePals online, visit http://www.ivpolepals.com/.