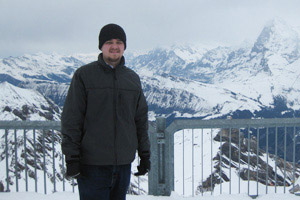 Through Texas Tech's study abroad program, Courtney was able to study in Sweden, a leader in wind energy.

Like so many college students entering their first year of college, William Courtney’s life was full of endless possibilities.  After an experience with High School Aerospace Scholars, a program that included distance education and time at Johnson Space Center, Courtney suspected his future might have something to do with NASA. However in actuality, he soon found out his destiny laid just on the horizon.

Roughly 400 miles separated Lubbock from his hometown of Austin. Courtney made the trip many times during his career at Texas Tech. He felt the crosswinds driving through the Texas Hill Country, and watched as thousands of turbines sprouted across the West Texas landscape. One morning, Courtney said he woke up to realize his true calling was in wind energy.

“After I realized that’s a really good field to get into, and it’s really interesting to me, I just kind of tried to get as involved as I could,” Courtney said. “My senior year is when I really got involved with wind energy at Texas Tech. I started doing undergraduate research and joined the student association here, the Wind Energy Student Association, and I’ve just been trying to do everything I can with wind energy.”

His goal is to understand the inner workings of a turbine and improve them, Courtney said.

That revelation led him to University College at Texas Tech, home of the Texas Wind Energy Institute (TWEI) and five professors who are experts in that field.

“It's a great program,” Courtney said of Texas Tech's wind energy curriculum. “All of the professors are really knowledgeable. They really know what they are talking about. It's kind of a small program right now, so it's really easy to get to know everyone.”

After graduating with his mechanical engineering degree in May 2011, Courtney spent the first part of his summer working with professors to convert courses for use in Blackboard, in addition to his research pursuits. He then spent three weeks in Sisimiut, Greenland, where he took a course on sustainable energy in the Arctic.

Courtney said he would like to explore offshore wind energy, an industry already well-developed in Europe, but relatively unknown in the United States. In the fall, he will pursue a Master of Science in Wind Energy at Denmark Technical University, a leader in the field of wind energy innovation.

Courtney discovered his affinity for the region while in Sweden, as part of Texas Tech’s study abroad program.

“I just really loved the country, the culture and the people. And it just happens to be a country that is famous for wind energy, as well,” he said. “I just really wanted to go back there and learn something new. Maybe learn some Danish.”