The Susan Polgar Institute for Chess Excellence Invitational was a life-changing event for two young women.

Dyhemia was selected by Polgar to be the wild-card invitee at the SPICE invitational.

At Texas Tech, chess represents more than a challenging game and checkered board.

For two young women who visited Texas Tech last week to participate in the Susan Polgar Institute for Chess Excellence (SPICE) Invitational, it was a life-changing event. Meet Dyhemia Young and Vanita Young.

Dyhemia, age 15, has spent most of her life in the California foster care system. She was selected as a wild-card invitee by Susan Polgar. The SPICE invitational was Dyhemia’s first officially rated tournament. Vanita, a 17-year-old who lost both of her parents by her early teens, currently lives in Pennsylvania with her grandparents. Vanita beat out 600 other young women in her state to win a spot at the Polgar invitational.

But there was one problem. In the few weeks leading up to the invitational, neither girl was in a position to pay for travel expenses.

SPICE and many other generous donors, namely Will and Jada Pinkett-Smith and Pennsylvania U.S. Rep. Bob Brady, helped sponsor the two young ladies, and at the end of the competition, Dyhemia and Vanita were awarded out-of-state scholarships worth up to $40,000 to attend Texas Tech once they graduate high school.

Dyhemia and Vanita, who are not related, recently shared their experiences of their time at Texas Tech with Texas Tech Today.

How did you feel when you found out you had been invited?

Dyhemia: It’s been really exciting. I was just, wow. That’s all I could say. “Wow! For real? Really?”

Vanita:  I was definitely more excited than nervous. Since I was top at state, I had a big head for a while. I thought I could beat anybody, but when weeks turned into days, I got nervous.

How did you feel about the support you received from so many people?

D: When they asked me that question before, I nearly started crying. When I started talking about Susan, I never, ever, ever thought I was going to meet her in person. And then I met her, and now I’m teary-eyed because I’ve been here all week, and now I’m fixing to leave. I have learned so much.

How was your time with Susan Polgar?

D: I’d always heard of her. People spoke very highly of her, and then when I met her when we got off the plane, we talked. She gave me a ride all the way to the dorm and showed me around. She gave me some gifts, and I got so emotional I nearly cried. Well, I did cry. I was so emotional today. I think I cried about four different times for just about ten minutes straight. I’ve really enjoyed my time being here.

Again, I’m speechless. Susan, I think you know I am very thankful and happy to have you in my life. Oh my gosh, I’m going to have tears again, but Susan has done a lot for me while I’ve been here, and I am most definitely going to keep in touch with her when I do leave. I think so highly of her.

V: You would not believe the first time I saw her. I was at middle school nationals in Fort Worth and I was in the elevator with her. I was running late, and I didn’t know who she was at the time. I was in eighth grade. Then later people were talking about her and I asked, “Who’s Susan Polgar?” and they said, “top female,” and they showed me her and I was like, “Wait, I was on the elevator with her!” 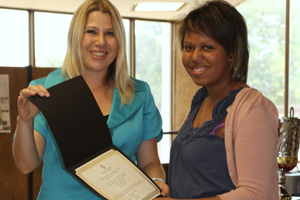 Vanita beat out 600 other young women in her state to win a spot at the SPICE invitational.

What kind of training did you receive last week?

D: My class was kind of like Vanita’s, but she’s a higher level. We mainly focused on puzzle solving and basically making sure you know the main key things when you open, making sure you know your openings and key pieces, making sure each move you do is either to attack, or you’re defending. Then we played against each other in class using the tactics and notations. I had to learn notations. I don’t use them well, but I do know how to notate now.

It was like a 180-degree turn around from when I got here. My first game, it was like I was playing blitz. For real, I got down to the end and had to resign because the girl didn’t want to draw, and I knew I was going to lose. Then my second game was way better. I was down a bishop. I could have won if I had a bishop, but it was a good game. I gave the girl a run for her money. The game I played after that, I won. And the one I just played, I lost. But I had the girl show me the moves that I made that I should have not done. Luckily, she was my friend, so she was able to show me.

V: We had a lot of training this week. They were three-hour classes each, four classes altogether.  We did a lot of analyzing, deep analyzing, and imagining things in your head without looking at the board. It was fun.

What was your favorite experience about last week?

D: I finally won a game! Oh, and I have my face on my own chess board. It’s my face on the board, and it says Dyhemia Young Cinderella! It has a list of all the people that helped me get here.

V: Meeting female chess players and working with top chess players. Susan and her husband have been amazing this week. I’ve learned so much from them in thinking steps ahead in my game. You know, when he said the tactic of visualize the pawn? I’d never thought of looking at the board like that, so I definitely learned something new.

What are your plans after high school?

At first I didn’t know anything about Texas Tech, so I couldn’t really give an answer of whether I wanted to come here or not, but now I’ve read the brochure and spent some time here. I will always keep Texas Tech in mind, especially since I know I’d be on the same campus as Susan. I know if I needed anything, I could just call her and be like, “Susan, can you please come to my dorm? I need help!”

V: I definitely plan on going to college. I wouldn’t mind going to Texas Tech because I want to be in computer science as a computer engineer, and I want to be part of Susan’s chess team.

Polgar on Dyhemia and Vanita

Polgar said both girls represent hope for many other young women in difficult situations.

Speaking specifically about Dyhemia’s story, Polgar said last week’s experience was not only life changing for Dyhemia, but for many others.

“I think Dyhemia is a very special girl. The way I look at it is that she’s just one of the many Cinderella potentials, and her story can inspire thousands of other girls in difficult situations that they are in. It can become hope and encouragement.”

Texas Tech SPICE is working in collaboration with the World Chess Federation in hopes of making its invitational an international event in the next few years.

Paul Truong, SPICE publicist, said they hope to one day issue an international wild-card, much like the one they issued Dyhemia.

It takes many moves to find missing young chess whiz