What scientists have interpreted as ancient riverbeds, are more likely to be lava flows. 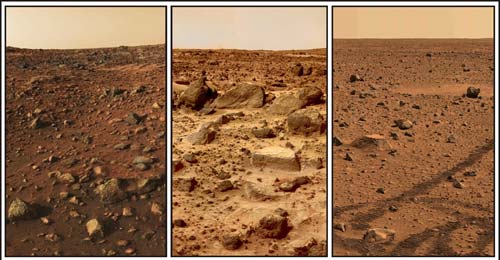 The severe volcanic activity that created the largest outflow channels might have hampered the planet’s ability to support complex organisms living on the surface.

Since the Mars Viking missions of the ’70s, humans have compared the topography of the Red Planet’s surface to their home and imagined a world that once contained flowing rivers that carved channels and canyons.

But David Leverington, an associate professor in the Department of Geosciences at Texas Tech, said what we interpret as the largest ancient riverbeds on Mars most likely were created not by water, but by massive, fast-moving, low-viscosity lava flows that ravaged the planet’s surface in a way we don’t see on Earth.

He said most Mars researchers believe these channels were created by water, and that has buoyed the belief that life on the planet may be or once was possible. But the water theory has several holes in it.

In his recent study in Geomorphology, which will publish in September 2011, Leverington uses recent high-resolution photographs and mineralogical data to help lay out his theory for why lava is a much more likely culprit for creating the largest class of the outflow channels and canyons, which can stretch up to 1,800 miles. Read the article here. 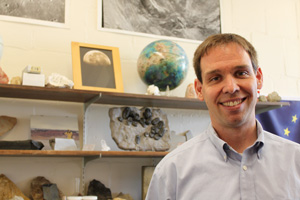 Leverington said what we interpret as the largest ancient riverbeds on Mars most likely were created not by water, but by massive, fast-moving, low-viscosity lava flows.

“This paper highlights the strengths and weaknesses of the two theories that these outflow channels were formed by volcanic or water activity,” he said. “Many scientists realize there are issues with aqueous interpretations of these channels. They recognize that if these systems formed by giant subsurface flows of water, there would need to have been extraordinarily high ground permeability, up to a million or more times greater than what we’d expect for the crust of the Earth, just to allow sufficient amounts of water to make it to the outflow locations and erupt to the surface.”

Channels Formed by Lava, Not Water

While water exists on the planet, most of it appears to be trapped at the poles and at higher latitudes in the form of ice, Leverington said. Most modern theories on the creation of the largest channel systems center on the action of surface floodwaters forced up from enormous aquifers.

Martian water does exist in large quantities, Leverington said, but nowhere near the volume that we have on Earth.

“What we know about Mars’ water is that it’s primarily in the solid state and concentrated at higher latitudes,” he said. “We see large concentrations at the polar icecaps. Various measurements also have been made to infer the presence of water at high latitudes to mid latitudes where there appears to be ice frozen below the surface. An important question has recently arisen: Is there much more water on Mars than this? While there is a considerable volume of water on Mars, it may not be sufficient to have driven the kinds of channel-forming processes many believe happened.”

The Martian outflow channels superficially resemble channels on Earth that formed by floods from giant glacial lakes. However, unlike Earth’s water-formed channels, Leverington said the large Martian canyons do not feature obvious river deposits and don’t terminate in delta-like, sediment-laden mouths, such as at the end of the Mississippi River. Instead, they fade into vast plains composed of volcanic basalt.

“We see abundant evidence for past eruptions of lava at the heads of these large systems, for flows along these systems and for extraordinarily large volumes of lava at the mouths of these systems,” he said. “These characteristics are very similar to what we see at volcanic channels on the moon and on Venus. There’s really no known process for the rapid eruption of large amounts of water from aquifers to form channels that are thousands of miles long. We do have evidence of this happening through past volcanic processes on the moon and Venus.”

These kinds of channel-forming volcanic flows wouldn’t have been like anything ever seen by humans on Earth, Leverington said, though evidence suggests these types of massive lava flows could have occurred very early in our planet’s history.

Water and Life on Mars

Though clays and other minerals indicate there would have been water at least in the vapor form during Mars’ early history, other ancient minerals that should have been affected by the later presence of water are mostly in their natural and relatively unaltered state. Many of these pristine minerals are found in the valleys and terminal basins of the largest Martian channels

“If we look at modern mineralogy of ancient materials exposed on the surface of Mars, we see some evidence that water was present in the vapor or liquid state very early on,” Leverington said. “We also know of many materials that should have been altered by wet conditions quite readily that haven’t been greatly altered, though they have been exposed since quite early in Mars’ history. Some ancient exposed bedrock contains large amounts of iron-rich olivine, and that has not been altered in the past 3.5 billion years. That would suggest that most of Mars history has been extraordinarily dry.

“Surface conditions were likely to have been relatively wet in large regions only in Mars’ earliest development stages. These wet stages pre-date the development of the large outflow channels on Mars.”

But that doesn’t mean that life on Mars couldn’t have developed, he said, though the severe volcanic activity that created the largest outflow channels might have hampered the planet’s ability to support complex organisms living on the surface.

“There’s still the potential for life to have developed and even flourished in the earliest and wettest stages of Mars’ history,” Leverington said. “Simple life forms, such as bacteria-like organisms, could have lingered in the subsurface under the dry conditions that ultimately became widespread. But if the large outflow channels formed through volcanic mechanisms rather than substantial water flow, that mainly restricts the environments conducive to the development of life to the earliest stages of that planet’s history.”

The Moon and Venus

Example of a Moon volcanic channel.

Example of a Venus volcanic channel.