Created in 1971, Raider Red celebrates his 40th year as the Texas Tech mascot. 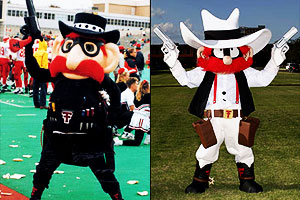 Although Raider Red's looks have changed over the years, Gaspard still favors the original.

Forty years ago in the Wall-Gates residence hall at Texas Tech, out of papier-mâché and chicken wire, Salvation Army boots and help from a seamstress in the theatre arts department, Raider Red was born.

A Star is Born

Saddle Tramp Jim Gaspard created Raider Red in 1971, when the Southwest Conference ruled live animals were not allowed to travel to visiting fields unless invited by the home team. Since the Masked Rider could not attend away games, Gaspard felt a temporary replacement was necessary.

“I never thought Raider Red would become anything more than a stand-in mascot,” Gaspard said. “I’m proud of what he’s become, and that I got to be a part of it.”

“Dirk West was the guy that really kind of came up with the concept of a character,” Gaspard said. “He had a character for every school in the Southwest Conference.”

“There wasn’t a book to read, and there wasn’t a design, it was all made from scratch,” Gaspard said. “There wasn’t an industry that made these things, and now every university has a secondary mascot.” 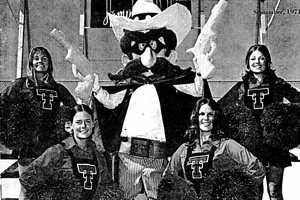 In the early years, Raider Red was used solely as a stand-in mascot, but has transformed into an honored tradition.

Raider Red’s looks have changed significantly over the years, Gaspard said, though he still favors the original. A lot of time and dedication went into the production of the mascot, whose ears were modeled after his then girlfriend, now wife of 38 years.

“We like to think of ourselves as mom and dad,” Gaspard said.

At the time, Gaspard never imagined the role Raider Red, what was then a temporary replacement mascot for away games, would play in the history and traditions at Texas Tech.

“Forty years is a long time for me,” Gaspard said. “Time has just flown by. I created Raider Red at the beginning of my college education and now it’s the end of my professional career, and he’s still a huge part of Texas Tech.”

Q: What is your best memory from your time at Texas Tech?

A: Well, of course, it was meeting my future wife-to-be in our Freshman year at Tech. We celebrated 38 years of marriage this year. As a 22 y/o student following four years of service in the US Navy and a tour in Vietnam, college life was a great awakening from my military enlistment experience and the political turmoil of the late 1960’s. I loved it all. The creation of Raider Red was certainly one of the most memorable highlights, as he was the center of my final two years.

Q: What is your favorite tradition at Texas Tech?

A: Besides my partiality to Raider Red, my favorite traditions have always been the running of The Masked Rider at the beginning of football games, after touchdowns, and the ringing of the Memorial Tower bells after a team victory, particularly over Texas University which I enjoyed twice during my time at Tech.

Q: What is your favorite thing about Texas Tech?

A: Being from a small town in SE Texas, Tech was the perfect college for me following the service, very laid back and with a diverse student body. It was easy to fit in and become involved in all aspects of student life.

Q: What does being a Red Raider mean to you?

A: I’m proud of our family heritage at Tech which began in 1926 when my father-in-law was a founding-years athlete in football and baseball. Then came uncles, in-laws and cousins, my wife and me, and most recently our youngest daughter who graduated from Tech in 2008. Tech traditions are pretty much a part of our family, and of course, the connection to Raider Red makes that even more special.