Gordon Ziemann's grandparents served as a host family for Texas Tech students studying abroad, and he never forgot that connection. 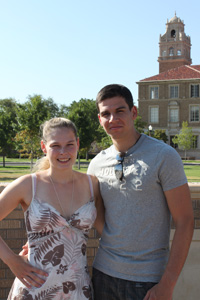 Ziemann, 23, and Peter, 22, have been at Texas Tech since early July and will stay through Sept. 19.

When German military student Gordon Ziemann needed a place to conduct research abroad, he recalled fond childhood memories of an American student teaching him to juggle at his grandparents’ home in Wust, Germany.

His grandparents served as a host family for Texas Tech students studying abroad, and Ziemann never forgot that connection.

Now Ziemann and fellow student Saskia Peter are at Texas Tech pursuing a research project in the area of lifelong learning.

In March, Ziemann sent an email to Meredith McClain, director of the Texas Tech center in Germany, seeking permission to study at the university that has a strong presence in his home country.

"When I was looking for an internship, my grandmother recognized Dr. McClain's name," Ziemann said. "I contacted her and she helped give us information to decide on Texas Tech."

Ziemann, 23, and Peter, 22, both students at German Military University in Munich, have been at Texas Tech since early July and will stay through Sept. 19.

Studying intercultural education, media and adult education, Peter and Ziemann both take a deep interest in developing a well-functioning system for lifelong learning for their home country. The subject of lifelong learning offers a multitude of possibilities and lacks the attention of research, which it deserves, Peter said.

Texas Tech, home to the Osher Lifelong Learning Institute, as well as a solid German language program, shares Peter and Ziemman’s passions for diversity and lifelong learning, making it the perfect location for their research.

“The unique thing about this research is the hidden aspect of intercultural connection in my mind,” Ziemann said. “We hope to give our professor we are working with in Germany some new opinions about the possibilities in intercultural support and experience to develop the system of lifelong learning in Germany.”

Peter said this research, which is being conducted through an online survey, will also serve to help their professor on a similar project funded by the Volkswagen Foundation.

Conducting this research at Texas Tech seems like a natural fit for Ziemann and Peter. 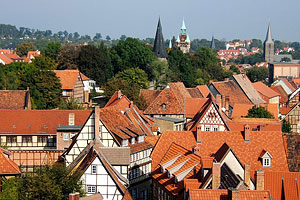 The initial program in Wust served as the beginning of the Texas Tech Quedlinburg Summer German Program, which has been around for more than 15 years.

A Connection to Texas Tech

When former President Ronald Reagan delivered his famous “Tear Down This Wall” speech, it served not only to reunite Germany, but also became a catalyst in the formation of an academic relationship between Texas Tech and Eastern Europe.

Following the fall of the Berlin Wall in 1989, McClain volunteered to help start the Summer School for English in Wust, a small farming town of 350 people. The initial program served as the beginning of the Texas Tech Quedlinburg Summer German Program, which has been around for more than 15 years.

“Ziemann and Peter’s totally unexpected selection of Texas Tech and Lubbock, rather than any other place in America, is one of many rewards for 35 years of connecting our area with Germany,” McClain said.

Although their primary goal as students at Texas Tech is research development, Ziemann and Peter want to embrace the new environment and culture surrounding them.

Peter said she and Ziemann, while they have only been in Lubbock a short time, have enjoyed how polite and pleasant people are at Texas Tech.

“Everyone in Texas likes to help us, drive us around or talk with us,” Ziemann said.

Peter and Ziemann said they are very grateful for extensive resources such as the Texas Tech library, and the Texas Tech faculty who helped them access these tools, especially Stefanie Borst, Laura Beard and Birgit Green.

Texas Tech is a big change from their mid-sized military school of about 4,000 students, Ziemann said.

Peter, a second lieutenant in the German military and Ziemann, a master sergeant, both find it interesting studying at a civilian school. Most of the students at the military university in Germany are soldiers, creating a different atmosphere than the one at Texas Tech.

“We were also really surprised about the dimensions of the campus. Although we knew that Texas Tech has a large campus, we could not imagine that it is this big,” Ziemann said. “At Texas Tech they have so many different subjects and this would not be possible in the university of the German armed forces because there are fewer students who attend.”

Some daily events in the U.S. are very different from doing the exact same task in the students’ home country.

“We had our first experience driving a car in America. And, believe me, it is something else in Germany,” Peter laughed.

Peter said their trip to Palo Duro Canyon in Amarillo, was one of their favorite experiences.

“It was really nice and special,” Peter said.

When not working on their research, Ziemann said he enjoys sports, especially American football, while Peter said she loves to swim and sing.

After their return to Germany in mid-September, Peter and Ziemann plan to spend about two more years completing their degrees and will both continue to serve in the German armed forces.

Back to School Fiesta Prepares Families for 2011-2012 School Year