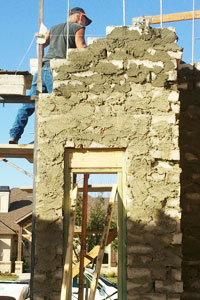 Engineering students will perform a series of tests on the Greenstar Blox™ to determine durability, resistance, and strength, among other attributes.

It looks similar to an ordinary cinder block, but it is only a third of the weight and just as strong. Plus, it does not crack like concrete or splinter like wood, because it is made from recycled newspapers, phone books and lottery tickets.

Zach Rabon, a 1999 graduate of Texas Tech with a degree in ecology and conservation of natural resources, believes he has come up with the next big thing in building materials. He recently returned to his alma mater to gather the evidence to back up his claim.

Rabon is president and founder of MasonGreenstar, an alternative building company that produces a patented product called Greenstar Blox™. The mixture is made from recycled short-fiber cellulose, cement, water, and a proprietary blend of additives; and poured into molds and dried in the sun. The finished Greenstar Blox™ are jagged and porous, but when stacked and adhered with the mortar, the walls act as insulation that is energy efficient, fire resistant and remarkably strong. Strong enough to absorb the force of a speeding bullet, Rabon said.

The mixture is not just limited to the shape Greenstar Blox™ take; the company is also exploring markets for panel systems, insulated concrete forms, as well as various Department of Transportation applications.

“The mortar and plaster are made out of the same material, so it becomes a solid structure,” he said. “Everything expands and contracts through the seasons at the same rate.”

“We do have a lot of different things the city has required of us, such as the rods from the foundation to the top of the walls for added reinforcement,” Rabon said. “The material is very forgiving. We just take a paddle bit and punch a hole through the Greenstar Blox™, threading the block up and over.”

Builders may not yet use Greenstar Blox™ in urban areas with stricter building codes, because this type of material lacks approval from the International Code Council. However, MasonGreenstar’s goal is to change that in the next year or two, and the necessary tests are already underway. Grant funding has enabled Texas Tech engineering students to perform thermal and durability tests on the Greenstar Blox™ that will determine strength, insulation properties, water permeability, wind resistance, load and more. 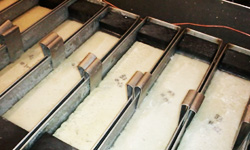 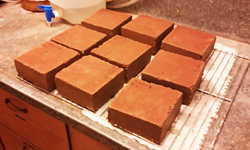 “We are all pretty much Texas Tech graduates,” Rabon said speaking of the company’s chief technology officer, Josh Hargrove, and his father, Kent Rabon, who also works for the company. “We’re honored that Tech wanted to get involved and become an actual partner in our company.”

Boback Parsaei and Alan Cox are two of the graduate students conducting the tests.

“Working with such a new material, I feel like I’m on the brink of doing something futuristic and being involved in something big,” Parsaei said. “This information will help MasonGreenstar fine tune the mixture, so they can produce the best possible formula.”

Much of Parsaei’s research is done in a temperature- and humidity-controlled environment, which gives them the ability to test the Blox to their full potential.

“My favorite part is breaking them,” said Cox, who is testing the product’s core strength and hardness according to ASTM (formerly known as American Society for Testing and Materials) standards. “There is a lot of variability with any mix design. So we want to be very confident that this product, under these design conditions, will work every time.”

Once the codes are written, Rabon predicts the possibilities for this new material are endless.