The three-year project is titled Operation Idiopathic Decline as a nod to the unknown reasons. 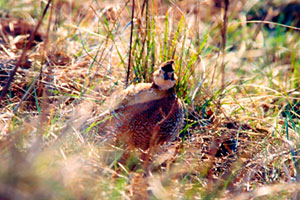 Though quail have been on the decline for the past 20 years, last year saw the greatest decline yet.

Researchers at The Institute of Environmental and Human Health (TIEHH) at Texas Tech recently received $846,000 to fund three studies looking at diminishing bobwhite quail populations across the state.

The money is part of $1.97 million allocated to Texas Tech as well as Texas A&M University by the Rolling Plains Quail Research Foundation to discover the culprit as to why these quail populations have dwindled to the lowest on record.

The three-year project is titled Operation Idiopathic Decline as a nod to the unknown reasons.

Though quail have been on the decline for the past 20 years, Ron Kendall, director of TIEHH and lead investigator for one of the three Texas Tech research projects, said last year saw the greatest decline yet.

“I’d say the fall quail population on the Rolling Plains of Texas – one of greatest quail hunting areas in the country – declined by as much as 80 to 90 percent last year,” he said. “This is a huge drop. Ranchers contacted us and said they were finding dead birds, or weren’t seeing quail like they had seen them before. This happened late last summer to a large degree.

“This decline in quail has a huge economic impact on this area. People come from all over the country to hunt quail here. They’re a big economic boost for our state and particularly out here in West Texas. We don’t know what’s driving this. We just know the bottom fell out with quail populations in West Texas last year. For all small communities, this is a huge impact.”

Because of an abundance of rain and food thanks to last year’s El Nino weather event, Kendall said most scientists have ruled out the weather as the culprit.

“We think, at the end of the day, it’s a disease or disease/contamination interface,” he said. “So we’ll be trying to find out what those contaminants are. The central receiving station for all the birds being examined will be right here at TIEHH.”

“With this funding, we’re going to expand the scope on our quail population screening for diseases spread by insects and ticks,” he said. “Diseases such as West Nile virus may compromise quail health enough that they don’t reproduce as well or can’t escape predators as well. We’re going to expand our research to determine if quail decline is related to arthropod-borne disease.”