Red Raiders have flown in space and taken seats at mission control. 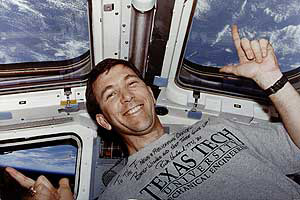 Displaying his Red Raider pride, Rick Husband poses with guns up while orbiting earth. The inscription reads: To the Texas Tech News & Publications Office- Best Wishes and Keep Those Guns Up!

As the space shuttle Atlantis sits on the launch pad at Cape Canaveral, Fla., awaiting its final voyage, Texas Tech commemorates a relationship with NASA that spans nearly a half-century.

Atlantis is scheduled to launch July 8 for a 12-day resupply mission to the International Space Station. Four astronauts – Commander Chris Ferguson, Pilot Doug Hurley and mission specialists Sandy Magnus and Rex Walheim – will fly Atlantis on what is to be the grand finale of NASA's shuttle program.

They are among an elite group of brave individuals who have risked their lives to further the understanding of worlds beyond our own. And several Red Raiders, both past and present, have played a significant role in that quest for knowledge. They include:

Bassett was among the third group of astronauts named by NASA in October 1963, and selected to be the pilot of Gemini 9, alongside Elliott See. Both men were killed four months before launch when their T-38 trainer crashed into Building 101 at McDonnell Space Center in St. Louis. Building 101 was where all Gemini vehicles were assembled. They died within 500 feet of their spacecraft.

Shortly after Harris completed a National Research Council Fellowship at NASA Ames Research Center, he joined Johnson Space Center as a clinical scientist and flight surgeon. Selected by NASA in January 1990, Harris became an astronaut in July 1991. A veteran of two space flights, Harris logged more than 438 hours in space, as mission specialist aboard STS-55 Columbia (1993), and as payload commander on STS-63 Discovery (1995), at which time he also became the first African-American to walk in space. Harris left NASA in 1996.

"If it weren't for Texas Tech, I wouldn't have been an astronaut," Harris said. "From here, I could do all the things that I could only dream of as a kid."

In 1998, Harris created the Harris Foundation, a Houston-based, non-profit organization which supports programs that empower underserved individuals to recognize their potential and pursue their dreams. Texas Tech will host the ExxonMobil Bernard Harris Summer Science Camp in July for a second straight year.

Husband was a pilot on STS-96 Discovery (1999), a 10 day mission which included the first docking with the International Space Station. He returned to space as crew commander of STS-107 Columbia (2003), a 16-day science and research mission. Husband and six crewmates perished when Columbia broke apart during re-entry over Texas, 16 minutes before scheduled landing.

Among his many talents, Husband sang with the university choir. He even took the time to email the choir during his last mission to let them know he was exercising in space to their CD.

It is also relevant to note that Husband's pilot aboard STS-107, William "Willie" McCool, also has ties to Texas Tech. His mother, Audrey McCool, is a Texas Tech alumna. And, McCool's father, Barent McCool, is an assistant professor in the Restaurant, Hotel and Institutional Management Program in the College of Human Sciences.

Lockhart completed his degree at Texas Tech before being commissioned in 1981 to the United States Air Force. He was an F-16 test pilot when he was selected as an astronaut candidate in 1996, and later piloted two space flights aboard Endeavour in 2002, STS-111 and STS-113. Both were missions to the International Space Station.

Lockhart graduated in 2004 from the Royal College of Defence Studies in London and retired from the U.S. Air Force in 2007 and NASA in 2008. He currently works in the private sector.

Before landing in Lubbock in 2010, Sacco flew as the payload specialist aboard STS-73 Columbia (1995). The 16-day mission focused on materials science, biotechnology, combustion science and fluid mechanics contained within the pressurized Spacelab module.

Using his space flight experience, Sacco has since given more than 300 presentations to approximately 30,000 K-12 teachers and their students as a means to motivate students to consider careers in science and engineering. He is a fellow of the American Institute of Chemical Engineers, and in 2004 was elected to the International Academy of Astronautics.

Those experiences for success are something Sacco strives to emulate in his current position.  "We were a community at NASA, and we put the objectives above our personal advancements," he said. "The result was an environment where everyone loves to come to work, and where people feel valued while contributing to something special. If we can do that at Texas Tech, we will rocket to the top."

Davis was a Russian interface officer (RIO) in the Shuttle-Mir program for Atlantis missions STS-71 (1995), STS-74 (1995) and STS-76 (1996), coordinating communications between Houston and the Russian Mission Control Center near Moscow. Davis also worked as a flight design manager, putting together the trajectory information required to do a flight. And she was a flight director for the International Space Station from 1996 through 2008.

"There's nothing else like it in this world," Davis said about watching a live launch. "My husband and I met our grown daughter in Florida, for the launch of STS-134 (Endeavour) at the end of April. There was no launch and we were all very disappointed, but we had a pretty nice weekend vacation."

Currently, Davis is a shuttle systems safety manager, a position typically more intensive leading up to the flight, as opposed to the actual mission. For the final flight, she will be on the Mission Management Team in Houston, as the representative for the Space Shuttle Program's Safety and Mission Assurance office.

Kranz said she enjoyed her studies in public policy and the challenges of applying policy for good outcomes. "I use my education from Texas Tech every day that I come to work," she said.

Kranz's father, Gene Kranz, was the NASA flight director recognized for his efforts that helped save the Apollo 13 crew. He coined the phrase "failure is not an option." Her father's history as a pioneer in human space flight, combined with her job at Kelly Air Force Base in the procurement department, gave her the desire to work for NASA. She was especially motivated by the idea that she could "participate in buying the space systems and hardware that put humans in space."

Kranz's current position is to manage the mission support to the Orion Project. The Orion Project's objective is to design, develop, test and deliver a human-rated crew transportation vehicle capable of exploration beyond low Earth orbit.

DeLucia is the coordinator of the Human Factors Program, a multidisciplinary field concerned with what is known about people, their abilities, characteristics and limitations to the design of equipment they use, environments in which they function and jobs they perform.

During Kerrick's master's studies, she worked as a summer intern and cooperative education student at Johnson Space Center. Kerrick's first permanent assignment was as a Materials Research Engineer. She later became the first non-astronaut spacecraft communicator, and the first person of Hispanic heritage to lead Mission Control as flight director for the International Space Station.

"Texas Tech University not only provided me a well-rounded education, but the people I met there really helped build up my skills and truly supported me in my goal to work at NASA," Kerrick said.

For the upcoming launch, Kerrick is on rotational assignment to the Extravehicular Activities (EVA) Office as their deputy manager. She will be scheduled to support some of the daily Mission Management Team (MMT) meetins for STS-135 on behalf of the EVA office.

Kerrick said this final mission is a source of great pride, because she will share the historic event with her mother, who has never seen a launch in person.

Tumbiolo became a meteorologist for the U.S. Air Force, which put him on the path that led to his current position at Cape Canaveral. Since 1991, Tumbiolo has led all weather support for both the space shuttles and expendable vehicles.

Just before a vehicle blasts off, a NASA test director calls for a status check from all flight directors monitoring the various crucial systems. Tumbiolo is among those responding with a "go/no go for launch."

Tumbiolo has been monitoring the skies in preparation for STS-135 ever since Atlantis rolled out from the vehicle assembly building. He will turn control over to Houston, once Atlantis clears the tower at lift off.