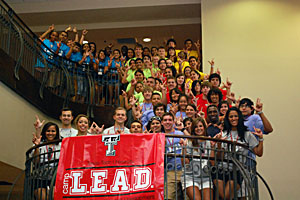 In the basement of the Student Union Building inside the Escondido Theater was a packed audience full of students from across Texas listening to New Jersey Nets Head Coach Avery Johnson as he talked about his experience as a member of the 1999 Spurs championship team. He spoke of how the team became a family and about the steps he still uses in sports and in life that students can use to reach their full potential as leaders.

After all, leadership was the focus of the four-day, three-night program, called Camp L.E.A.D., standing for leadership, education and development.

Therefore, Camp L.E.A.D. was implemented with high school students entering their junior year. The 2011 program is a pilot for future camps and included 50 students and two guidance counselors from 27 schools in the San Antonio, Dallas, Austin and Lubbock areas.

“All the students were chosen because their guidance counselors saw a certain potential in them. Camp L.E.A.D. is intended to train the students for the challenges they may face as a leader and how to excel with responsibilities,” Bookbinder said. 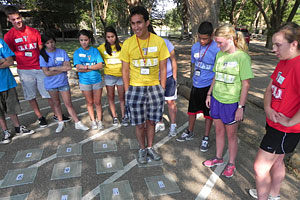 Students received classroom experience, but also went to the Spirit Ranch for the ropes course and spent time at the recreation center.

Guidance counselors throughout all the chosen areas were sent applications and told to nominate students with not just good grades, but also leadership qualities, extra curricular activities and high character.

All expenses for the camp were paid from private donations and support from the banking community in Lubbock, among others. The students not only had the opportunity to attend leadership training, but they stayed in residence halls like college students and were introduced to the Texas Tech campus.

“The students had the classroom experience, but also went to the Spirit Ranch for the ropes course and spent time at the recreation center. They even went on a scavenger hunt of the university where they took pictures and explored.” said Jeannie Diaz, director of Camp L.E.A.D. “I was excited to see all the energy from the beginning with all the activities. The camp provided a positive leadership experience for students, counselors and our staff.“

Johnson, former Dallas Mavericks head coach and 2006 NBA Coach of the Year, and Claudia Cogliser, assistant professor in the Rawls College of Business and teacher for Camp L.E.A.D sessions, both directed their leadership information from the book, ‘The Five Dysfunctions of a Team’ by Patrick Lencioni. The same book was among the many tools that were used by the Spurs organization as part of its Values Based Leadership trainin.

Upon arriving to Texas Tech, each of the students took the StrengthsQuest test, which evaluates a person’s top five areas of strength. Based on this information, the students were placed into five groups of 10 according to compatible strengths. Throughout the camp, each group attended different sessions with focus on teamwork, communication skills, influencing skills and personal wellness.

The Turning Point and Vision for Coming Years

Aspects of Camp L.E.A.D. that stood out to people the most were its uniqueness and the apparent change in the student’s outlook on leadership.

Dailey Fuller, marketing coordinator for the Texas Tech University System, said he was in close contact with the students and saw them each morph into different individuals by the end of camp.

“At the beginning, many of the students came in as individuals with their own ideas of leadership. There was a competition aspect to the camp, but it was clear that the students focused on more than just winning first place, as all walked away with a true understanding of leadership and what it means to work together as a team,” he said. 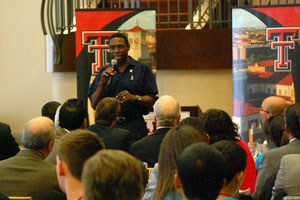 New Jersey Nets Head Coach Avery Johnson talked about his experience on the 1999 Spurs championship team, and the steps he still uses that the students can use to reach their full potential as leaders.

Juan Muñoz, vice president of Institutional Diversity, Equity, and Community Engagement and vice provost of Undergraduate Education and Student Affairs, said this program is designed to become one of the preeminent residential youth development programs in the state.

“Unlike many regional programs of this type, Camp L.E.A.D. at Texas Tech draws its students from across Texas so as to truly impact leadership development statewide,” he said. “In this way, the university is once more demonstrating its broad statewide outreach and engagement.”

The Texas Tech planning team, consisting of the Office of the Chancellor, Communications and Marketing teams from Texas Tech University and the Texas Tech University System, as well as the Offices of the President and Provost will come together to assess and debrief on the results of Camp L.E.A.D.’s pilot program. Changes and improvements can be made and the hope is to expand the camp to more markets and high schools in the future.

“The challenge was to get individuals from high schools that are six hours away to put Texas Tech on their radar when choosing a college. We needed to give them a valuable experience, and we believed they could grow as students from a leadership camp,” said Bookbinder.

For more information about the program and how to get involved, please contact campLEAD@ttu.edu or Jeannie Diaz at (806) 742-1095.