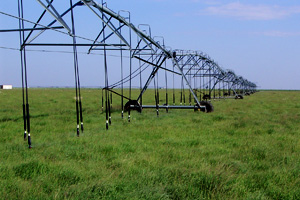 In the battle against the state’s prolonged and brutal drought, Texas Tech agricultural researchers have released two new farmer-friendly computer tools that save scarce irrigation water and boost bottom lines for parched producers.

The web-based programs are being offered free of charge through the Texas Alliance for Water Conservation, and take direct aim at improved irrigation scheduling and resource allocation. Both were developed to specifically target the needs of irrigated farmers in the West Texas and Panhandle regions.

“They’re designed to help producers make the most out of an irrigation regime, while remaining conscious of water resources,” said Justin Weinheimer, a research associate in the Department of Agricultural and Applied Economics.

At the heart of the irrigation scheduling tool is a basic understanding of what scientists call evapotranspiration or, more simply, the loss of water from the soil both by evaporation and by transpiration from growing plants.

Specifically, it allows farmers to keep track of soil moisture on a field-by-field basis for irrigated cotton, corn, sorghum and wheat, using real time weather data from more than four dozen Texas Tech Mesonet weather stations spread across the plains. This network of automated stations collects a wide variety of temperature and moisture levels every 15 minutes.

“The tool allows a producer to customize irrigation scheduling based on field-level irrigation efficiency, soil moisture readings, and other agronomic and irrigation characteristics,” Weinheimer said. A checkbook-style water balance then enables the farmer to determine when and how much water to apply.

The second web-based tool from the Texas Tech team is a resource-allocation analyzer. Put simply, the economic-decision aid is designed for use in the planning season to determine which crops will maximize the profit potential of a given field.

The resource-allocation tool projects crops, yield goals, irrigation requirements and acreage designations on a field-by-field basis, Weinheimer said. That ability allows producers to maximize the revenue potential given the irrigation capabilities of the field.

“It works on the major commodities produced in this region and differs from other like-tools in that it is farmer friendly, requiring minimal producer input, yet providing realistic outlooks for producers to consider,” Weinheimer said.

In Texas, virtually no part of the state has been untouched by the drought. City dwellers along with farmers and ranchers have been besieged by excessive heat and high winds. Last month, the United States Department of Agriculture designated all 254 counties in Texas natural disaster areas, qualifying them for varying levels of federal relief.

State agricultural officials said even if weather patterns shift and relief-giving rain comes, losses are likely to head past $3 billion in Texas.