According to 'Pecans: The Story in a Nutshell,' a Texan may be responsible for the original pecan pie recipe. 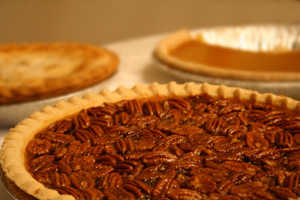 Whether you say “puh-cahn” or “pee-can,” grab a slice of your favorite pecan pie.

Even before the nuts became the mainstay as a source of protein and healthy fat as part of a well-balanced diet, pecans have been important to the great state of Texas.

Pecan trees grow wild and/or cultivated in 200 of Texas’ 254 counties. Texas has historically ranked among the top states in the total production of pecans in the United States.

Texas made the pecan tree its state tree in 1919. Texas Gov. James Hogg liked the tree so much he requested one be planted at his gravesite.

According to “Pecans: The Story in a Nutshell,” a Texan may actually be responsible for the original pecan pie recipe:

“Vesta Harrison of Fort Worth, Texas, was another contender for the original pecan pie. As a teenager she attended cooking school run by a certain Mrs. Chitwood from Chicago. One night, Vesta dreamed of a pecan pie. But Mrs. Chitwood brushed her off and told her there was no such thing. Undaunted, she said to herself, ‘Well, by gollies, I don’t know how, but I’m gonna mess up something making a pecan pie.’ So she made a sorghum syrup pie and put a cup of pecans in. The teacher enjoyed it, asked for the recipe, and sent it off to an unrecorded organization in Washington. Very soon after, a five-hundred-dollar check was in the mail for her Texas Pecan Pie. ”

The recipe, as adapted, follows:

Blend sugar and flour well. Pour mixture into a 9-inch pastry-lined pie plate and bake at 350°F for 45 to 50 minutes, or until filling is set.

Whether you say “puh-cahn” or “pee-can,” grab a slice of your favorite pecan pie and toast Governor Hogg for making the humble pecan such an important part of the Lone Star State.

Pecans: The Story in a Nutshell

Jane Manaster’s "Pecans: The Story in a Nutshell," published by the Texas Tech University Press, is a fun, fast read for anyone who grows, sells or just loves to eat pecans.

The book covers all things pecan – history, cultivation and the many uses of the pecan tree and nut – but it is also laced with fun facts, such as how the nut got its name: it's an Algonquian Indian word meaning the nut too hard to crack by hand.

What Digital Footprints Are You Leaving Behind?