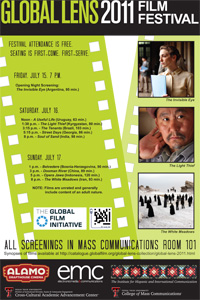 This is the third year the Global Lens series will showcase at the College of Mass Communications. Click to Enlarge.

Against the backdrop of Argentina’s mid-80s military regime, an overzealous young teacher develops an unusual obsession with one of her students after she is asked to keep a watchful “eye” over the happenings at an elite Buenos Aires private school.

Argentina’s film “The Invisible Eye” begins Texas Tech's presentation of The Global Film Initiative’s Global Lens 2011 Film Festival at 7 p.m. July 15. The festival is a showcase of ten critically acclaimed narrative feature films to be screened at the College of Mass Communications through July 17.

The festival also includes films from Uruguay, Kyrgyzstan, Brazil, Georgia, India, China, Indonesia, Iran and Bosnia-Herzegovina. All screenings will take place in room 101 of the College of Mass Communications. Seating is available on a first come, first serve basis.

Global Lens is an annual touring film series, launched in 2003, that supports the distribution of cinematic words from around the world. This marks the third year the series will play at the College of Mass Communications. A detailed schedule of the screenings is as follows: