The exhibit will feature canine art through early September. 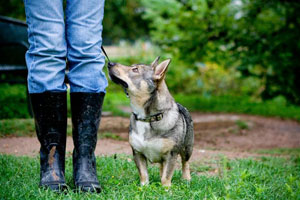 This photo of a Swedish Vallhund by Amanda DeMarree is one of many featuring international dog breeds.

For the second year, Texas Tech’s International Cultural Center (ICC) has acknowledged the dog days of summer with an exhibition of photographs showing dogs in all their diversity.

“Such an exhibit is perfectly suited for the ICC, since of the 150-plus breeds recognized by the American Kennel Club, only twelve originated in the United States,” said Jane Bell, ICC senior director. “Of course, the mutt – which the AKC classifies as All-American – is probably the quintessential American ‘breed’ since, like many of us, mutts claim a proud lineage that includes genetic input from a variety of ancestors.”

Photographs included in the exhibit are by the following: