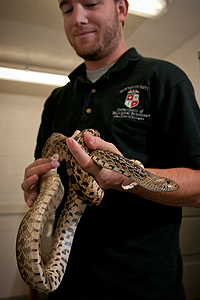 Weaver said without his Texas Tech education he would be unable to create the TX Snakes application.

Jeremy Weaver’s love for snakes began at Texas Tech. Now he’s trying to share his passion through the iPhone.

Weaver, a Texas Tech graduate student, recently created a unique iPhone application spurred from an interest in snakes that began during his undergraduate career in the Department of Biological Sciences.

Currently ranked in the top 25 of paid-reference applications in the Apple App Store, TX Snakes allows users to narrow their snake search through many categories, such as the entire state, region, county, pattern, venomous, non-venomous and whether the snake has a rattle or not.

“TX Snakes features a range of browsing and searching capabilities that allow a young snake enthusiast to an experienced herpetologist identify virtually any snake encountered in Texas and view species information and photos,” Weaver said.

Upon entering the application, a user sees a screen with questions pertaining to such things as rattle, pattern and region. Once the user selects one of the options, snake names and photos appear on the screen, from which the snake can be identified.

Weaver said his love for reptiles began with his membership in the Texas Tech University/Howard Hughes Medical Institute (HHMI) as well as his undergraduate research in herpetology with Lou Densmore, a professor in the biology department and faculty director of TTU/HHMI.

Now a graduate student, Weaver noticed a need for snake identification and decided to fill it.

"After review of all the other reptile applications available, I noticed they focused more on providing information about snakes, but didn't really focus on identification,” Weaver said. “Since I live in Texas and catch snakes in Texas, this state was an easy choice to begin building apps that had the qualities I saw lacking from others.”

“This is a way for Jeremy to reach a large number of people with information about snakes.” Densmore said. “It informs them about how to recognize the venomous versus non-venomous snakes, and also teaches them about the importance of these animals in helping to control rodents.” 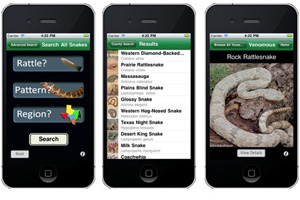 Densmore said the application showcases Weaver’s unique knowledge and capability in both technology and herpetology,

Weaver said his education at Texas Tech well-prepared him for this endeavor.

“The research opportunities afforded to me have allowed me to explore many facets of science,” Weaver said. “Without my education here at Texas Tech, in the classroom and with mentors and colleagues, I would not have possessed the skills needed to successfully design and publish an app of this caliber.”

In addition to TX Snakes, Weaver also built a snake application for Oklahoma, titled OK Snakes. His newest application for Kansas, KS Snakes, will be completed soon. The applications do not require a cell phone signal once downloaded, and therefore, can be used from any location.

Both TX and OK Snakes are available for 99 cents in the Apple App Store.