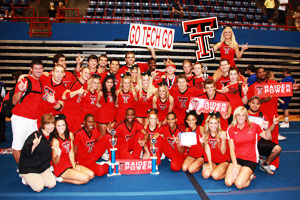 Texas Tech’s cheerleading squad is one of the best in the nation, earning the title “Best All-Around Collegiate Squad” and a rare Gold Paid Bid to the national cheer competition in April 2012 at Daytona Beach, Fla.

Raider Red, Texas Tech’s costumed public relations mascot, earned top honors as Most Collegiate Mascot, an honor bestowed by the other mascots in attendance, and was selected as an All-American Mascot.

“The All-American is the only individual award given out at camp, so for 11 members to earn the award was outstanding,” said Bruce Bills, spirit coordinator in the Center for Campus Life.

“The Gold Paid Bid is a high honor, too,” Bills said. “Only six Gold Bids were awarded at this camp, and there were 28 teams in attendance.”