Ovenbirds and veeries eavesdrop on their enemies to find safer spots to build their nests. 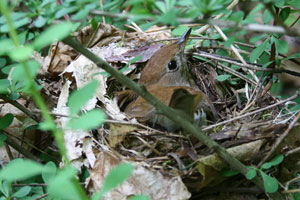 Veeries only weakly responded to chipmunk calls suggesting they may not use their calls as ovenbirds (Seiurus aurocapillus) do. Photo courtesy Quinn C. Emmering.

Ground-nesting birds face an uphill struggle to successfully rear their young, with many eggs and chicks falling prey to predators.

However, two researchers at Texas Tech have found that some birds eavesdrop on their enemies, using this information to find safer spots to build their nests. The study – one of the first of its kind – was published this week in the British Ecological Society’s Journal of Animal Ecology.

Ovenbirds (Seiurus aurocapilla) and veeries (Catharus fuscescens) both build their nests on the ground, running the risk of losing eggs or chicks to neighboring chipmunks that prey on the birds.

Nesting birds use a range of cues to decide where to build their nests, but doctoral candidate Quinn Emmering and Kenneth Schmidt, an associate professor in the Department of Biological Sciences, wondered if the birds eavesdrop on the chips, chucks and trills chipmunks use to communicate with each other.

“Veeries and ovenbirds arrive annually from their tropical wintering grounds to temperate forests,” Emmering said. “They must immediately choose where to nest. A safe neighborhood is paramount, as many nests fail due to predation. Predators are abundant. However, many predators communicate with one another using various calls, scent marks or visual displays that become publicly available for eavesdropping prey to exploit.” 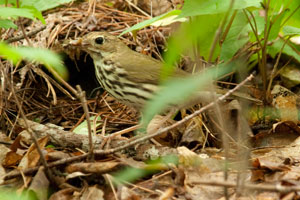 Working in the forested hills of the Hudson Valley 85 miles north of New York City, Emmering and Schmidt tested their theory that ovenbirds and veeries might be eavesdropping on chipmunks’ calls before deciding where to nest. At 28 study plots, a triangular arrangement of three speakers played either chipmunk or grey tree frog calls (a procedural control), while at 16 “silent” control sites no recordings were played.

“Chipmunks call often during the day and sometimes join in large choruses,” Emmering said. “We thought this might be a conspicuous cue that nesting birds could exploit.”

The weaker response by veeries suggests they may not attend to chipmunk calls as ovenbirds do.  This difference could ultimately have an effect on how their respective populations are able to respond to dramatic fluctuations in rodent numbers that closely follow the boom-to-bust cycles of masting oak trees.

“We found that by eavesdropping on chipmunk calls, the birds can identify hotspots of chipmunk activity on their breeding grounds, avoid these areas and nest instead in relatively chipmunk-free spots,” Emmering said. 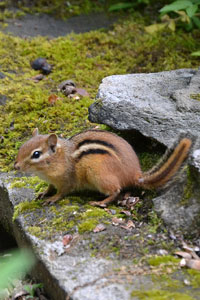 Veeries are forest thrushes with warm, rusty-colored backs and cream-colored, spotted chests. Ovenbirds are large warblers with dark streaks on their underside, and are olive above with a bold white eye-ring and an orange crown bordered by two dark stripes.

Ovenbirds and veeries primarily forage on the ground and the shrub layer of the forest. Veeries build open, cupped-shaped nests directly on the ground or up to 3 feet high in shrubs.  Ovenbirds, on the other hand, always nest on the ground, building dome-shaped nests made of leaves, pine needles and thatch with a side entrance. Ovenbirds are so-called because their unique nests resemble a Dutch oven where they “cook” their eggs.

Chipmunks produce three types of calls: a high pitched “chip,” a lower pitched “chuck” and a quieter “trill” consisting of multiple, twittery notes. Chips and chucks are often given in a series when a predator is detected and trills are usually in response to being chased.

The British Ecological Society is a learned society, a registered charity and a company limited by guarantee. Established in 1913 by academics to promote and foster the study of ecology in its widest sense, the society has 4,000 members in the UK and abroad.

Eastern chipmunks (Tamias striatus) produce a variety of calls to communicate with one another including 'chips', 'chucks' and 'trills'. Recording courtesy Quinn C. Emmering