The dragonfly, which is as small as a dust mote, wins the design contest for novel microelectromechanical systems. 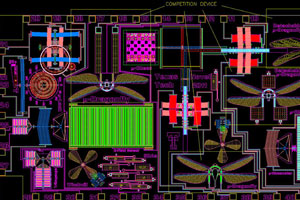 The dragonfly features biologically mimetic wings about the width of five human hairs, and is intended to generate aerodynamic lift and thrust by flapping its wings.

A dragonfly as small as a dust mote, its four tiny wings beating like it had momentarily alit on a lily pad designed by Texas Tech University engineering students, was a winner in this year’s design contest for novel microelectromechanical systems (MEMS), held at Sandia National Laboratories.

The gadget opens new possibilities in the design of aerial surveillance devices, which have many uses, from quantifying the radiation leaking from damaged Japanese nuclear reactors to delineating enemy positions.

The dragonfly features biologically mimetic wings about the width of five human hairs. It is intended to generate aerodynamic lift and thrust by flapping its wings instead of a motor-driven propeller or jet thrust. Flapping is achieved when small intermittent electric currents cause thermal expansion and contraction in the wings. Clever engineering uses the wing material’s response to create strokes that are more aerodynamic and hence more efficient.

“Among the countless insect species able to fly, we chose the dragonfly because it flaps its wings in the vertical direction, rather than back-and-forth or in a rotary motion,” said Oak. “The vertical motion of the large wings in our design not only provides greater surface area for lift than most flying insects but the wings cool faster, enabling faster flapping.”

A highly sensitive microvalve, designed by students at Carnegie Mellon University, was the winner of the educational MEMS. This year’s contest participants also included the universities of Oklahoma and Utah, and the Air Force Institute of Technology.

The contest is open to institutional members of the Sandia-led MEMS University Alliance program, part of Sandia’s outreach to universities to improve engineering education. It provides an arena for the nation’s student engineers to hone their skills in designing and using microdevices. Such devices are used to probe biological cells, arrange and operate components of telecommunications and high-tech machinery and operate many home devices and strengthen national security.

The entire contest process takes almost nine months. It starts with students developing ideas for a device, followed by creation of an accurate computer model of a design that might work, analysis of the design and, finally, design submission. Sandia’s MEMS experts and university professors review the design and determine the winners.