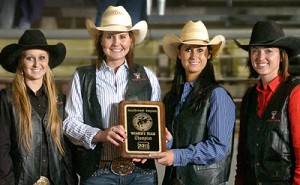 “All four of our members gained points during the week,” said Chris Guay, Texas Tech’s rodeo coach and an instructor in the Department of Animal and Food Sciences.

More than 400 cowboys and cowgirls from more than 100 universities and colleges compete in Casper each year. Contestants compete all year in one of the National Intercollegiate Rodeo Association’s 11 regions for a chance to rope or ride in the national finals. The top three students in each event, and top two men’s and women’s teams from the regions qualify.