Tim Hudson will start his duties Aug. 1 as vice chancellor with a focus on distance education and academic affairs. 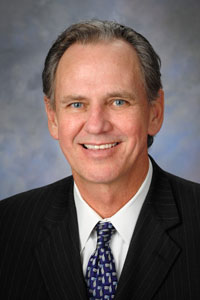 As vice chancellor, Hudson will primarily focus on distance education and academic affairs.

Texas Tech University System Chancellor Kent Hance announced today (June 27) the hiring of Tim Hudson as a vice chancellor with a primary focus on distance education and academic affairs. He will begin his duties on Aug. 1.

Hudson will coordinate and support the distance education and online programs at each of the Texas Tech University System institutions.

“As the demand for online education increases, public higher education must remain innovative and meet the needs of students,” Hance said. “The Texas Tech University System will continue to proactively address this crucial issue with the help of Dr. Hudson.”

“It is a privilege to join the Texas Tech University System, a nationally recognized, premier system of higher education,” Hudson said. “I believe the component institutions have great potential to become leaders in this field and play a key role in helping the state achieve its ‘Closing the Gaps’ goals. I am excited to be a part of a team committed to making high-quality higher education more accessible and taking the system’s programs to the next level.”

According to Eduventures, online learning is expected to grow from 780,000 students in 2004 to an estimated 3.97 million students in 2014. Babson Survey Research Group estimates the percentage of all enrolled students taking at least one online course in 2008 was 25 percent compared to only 12 percent in 2003.

“With Dr. Hudson’s leadership, our institutions will be at the forefront of distance and online education, providing our students with the best possible opportunities to succeed.” Hance said. “We are excited to have him as part of our team.”

Hudson is currently a special assistant to the chancellor for international programs and initiatives at the University of Houston System.  He previously served as president of the University of Houston-Victoria (UHV) from 2004-2010.  During this time, UHV inaugurated several new degrees, doubled its enrollment and became a statewide leader in online programs.  Before becoming president of UHV, he spent two years as provost and vice president for academic affairs at the University of Southern Mississippi (USM) where he had previously been the founding dean of its College of International and Continuing Education.

Hudson earned his bachelor’s degree in history and Latin American studies at the University of Mississippi in 1975 and received an ITT International Fellowship to Colombia.  He earned his master’s degree in geography in 1977 from USM and his doctorate in geography from Clark University (Worcester, Mass.) in 1980. He and his wife, Deidra, have three children at home, a 13-year-old daughter and 9-year-old twins, a boy and a girl.