Kendra Phelps and Julie Meadows will travel to Malaysia through the Fulbright U.S. Student Program. 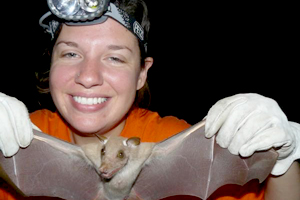 Phelps will be studying bat conservation in Malaysia.

Two students at Texas Tech received scholarships from the Fulbright U.S. Student Program, sponsored by the U.S. Department of State.

Kendra Phelps, a doctoral candidate in biology, earned a research-based fellowship to study bats in Malaysia, and Julie Meadows, who graduated in December with a bachelor’s degree in music, earned an English teaching assistantship to Malaysia.

The Trip of a Lifetime

“I will be studying bat conservation and looking at the impact humans have on caves and how that affects bats as well as the cycle of virus transmission,” Phelps said. “A lot of zoonotic diseases from bats are showing up in humans because humans are having more contact in these areas. This research project is human health and bat conservation.” 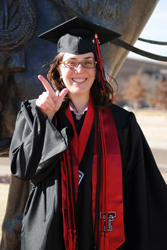 Meadows, who minored in linguistics and Asian studies, said she will assist teaching English to Malaysian high school students.

“I’m excited to do some work in another Asian country and hopefully get some more international experience that will be useful later on,” she said.

Phelps and Meadows are two of the more than 1,600 U.S. citizens who will travel abroad for the 2011-2012 academic year through the Fulbright U.S. Student Program.

The program offers fellowships for U.S. graduating college seniors, graduate students, young professionals and artists to study abroad for one academic year and operates in more than 155 countries worldwide. Recipients of Fulbright grants are selected on the basis of academic or professional achievement, as well as demonstrated leadership potential in their fields.

Jane Bell, Fulbright program advisor, said she was proud of this year’s winners.

“In the thirteen years that I have served as Texas Tech’s Fulbright Program advisor, this was the most competitive year ever,” she said. “Kendra and Julie should be proud of their accomplishments.”