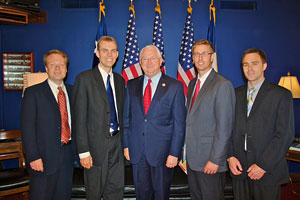 The iOMe team had the opportunity to let policymakers know that millenials care about their retirement, even thought it won't be for a while.

National champions of the 2010 iOMe Challenge from Texas Tech's Division of Personal Financial Planning (PFP) were awarded the highly-influential opportunity to discuss retirement policy ideas for generation y with policymakers and members of Congress in Washington, D.C., in May.

Graduate student team members Benjamin Cummings, Chris Browning, Shaun Pfeiffer and Tom O’Malley, who won the iOMe Challenge for their essay and video addressing the importance of improving retirement saving rates among younger generations, emphasized to policy makers the importance of improving retirement policy for the millennial generation, which is facing reduced future entitlements and increased responsibility for funding their own retirement.

The students met with Sen. Herb Kohl and Debra Whitman, staff director and chair of the Senate Special Committee on Aging, to discuss upcoming policy initiatives. They also met with Sen. John Cornyn, Rep. Reid Ribble and Rep. Randy Neugebauer regarding the importance of the current budget debate.

“These policies greatly impact our generation, but not many people are letting their voices be heard,” Cummings said. “We appreciate the opportunity to let policymakers know that we care about our retirement, too, even though it won’t be for a while.”

During their meetings, students explained their proposal for improved simplicity and retirement plan defaults to increase savings rates and improve information disclosure, allowing employees to make better decisions. Among their suggestions was the unique idea of providing employees with an estimate of their expected retirement income based on their current 401(k) savings.

Michael Finke, the team’s faculty advisor and associate professor in the PFP division, said the team made an impression on Washington, D.C.

“Both Sen. Cornyn and Sen. Kohl share the same conviction that retirement policy needs to be improved to ensure a smooth transition to self-funded retirement plans,” Finke said. “And Reps. Neugebauer and Ribble were particularly interested in discussing the current budget debate’s importance to the younger generation.”

Sen. Cornyn was also impressed to hear that Texas Tech has the largest financial planning program in the United States, Finke said.

In addition to the trip to Washington, D.C., the team received $10,000 in prize money for their winning entry.

A Semester Abroad In Your Own Backyard