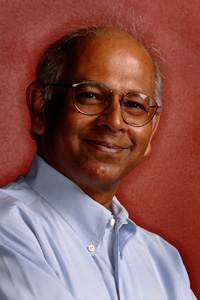 Chatterjee is an expert on how pterosaurs flew.

A 3-D film featuring a Texas Tech paleontologist recently earned an award from the British Academy of Film and Television Arts.

Sankar Chatterjee, curator of paleontology at the Museum of Texas Tech and expert on how pterosaurs flew, was featured in Sky1’s “Flying Monsters 3D,” narrated by Sir David Attenborough.

The film is the first 3-D film ever to earn a BAFTA award in the Specialist Factual category, and it beat out the BBC’s “Human Planet.”

“Pterosaurs were highly successful flying reptiles that lived 228 to 65 million years ago from the late Triassic Period to the end of the Cretaceous Period,” Chatterjee said. “They dominated the sky, swooping over the heads of other dinosaurs. Their sizes ranged from that of a sparrow to a Cessna plane with a wingspan of 35 feet.”

Attenborough, 85, and one of the best-known natural history filmmakers, interviewed Chatterjee on the evolution of Pterosaurs, which were the earliest vertebrates to take to the skies and develop the power of flight.