Garrett Hargrove discusses his future comedy career goals and reminisces about his time at Texas Tech. 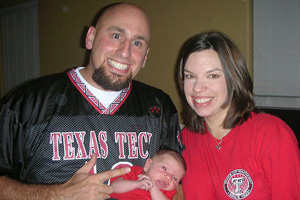 Hargrove graduated from Texas Tech in 2002 with a computer science degree, a major inspired by his love of the arts, movies and Pixar.

Hargrove remembers a love of writing from a young age. In elementary school he wrote a joke book to count as one of his required readings for the month and from then his hobby continued to grow.

“When my mom came to visit me at Texas Tech she would always say my dorm room was funky,” Hargrove said. “She told me I should write a book about dorm room decorating, and I did.”

Hargrove wrote a book, which is yet to be published, based on his dorm experience titled, "Whiskey Bottles & Pizza Boxes: The College Guy's Guide to Dorm Room Decorations.” His knack for turning ordinary ideas into humorous pieces of literature propelled his writing career.

From Joke Books to the Big Screen

“I started blogging on MySpace about things I found on the internet, about celebrities or things in the news,” Hargrove said.

Hargrove had support from his friends who thought his posts were funny, and when a job opened up with National Lampoon’s online magazine he sent them his writing samples and they offered him a job in 2008.

“Are you an essential government employee? Answer these questions to find out!,” “ Natural Disasters for Fun and Profit,” and“National Geographic Explores…Troll Island,”are only a few of the titles adorning Hargrove’s satirical articles found on the National Lampoon website.

Hargrove hopes to continue writing and aspires to make it as a big-screen writer one day. He recently collaborated with director Kyle Day, and wrote the screenplay for “Cherry Bomb,” an independent action-revenge film, currently in post production.

Hargrove resides in Austin, and said he is a true supporter of Texas Tech and a former Saddle Tramp. A few of his articles even mention his alma mater, particularly its football team.

“In 2008 when we beat Texas, I wore my Texas Tech shirts and hats and ties for probably a week,” Hargrove said. “It was awesome.”

From homemade joke books to writing for the big screen, Garrett Hargrove is a Texas Tech alumnus, making a name for himself in the comedic writing world and beyond.

Q: What was your favorite thing about Texas Tech?

A: The spirit of Tech. There's a crazy camaraderie that develops amongst the students, partially because of the location. The students at A&M run off to Houston for the weekend with no problem. In Austin, tons bolt home to Houston or Dallas. In Lubbock, you're on an island and everyone sticks around and you build these great bonds with the other students. And we know how to cheer on our teams without silly guys in white jumpsuits.

Q: What was your favorite tradition at Texas Tech?

A: Being in Saddle Tramps, I loved the Bell Circle at the beginning of football games. There was always so much energy to games at Jones stadium and to be right there in the middle of it just before kickoff was awesome.

Q: What was your best memory at Texas Tech?

A: Might be opening United Spirit Arena with Bob Knight & Indiana coming in to play. Or Freshman year, beating A&M on a last second field goal. Or sneaking a keg up the back steps of Carpenter Wells. But that one happened a lot.

Q: If you had to sum up your experience at Texas Tech into a book title, what would it be and why?

A: "Sorry it took me so long to graduate, Mom, but I was having fun." I wasn't the best student during my time at Tech. And I like overly long titles to books.