Pelley has been with CBS for 21 years and takes over the anchor desk of the Evening News on June 6.

He has covered wars, natural disasters and presidential campaigns. He has worked in news bureaus from Texas to Saudi Arabia and served as a chief White House correspondent. But CBS newsman and Texas Tech alumnus Scott Pelley soon will try something he has never done before – anchor a network newscast.

“To tell you truth, I’ve never anchored a television broadcast – ever – in my career. Not in local television. Not in network television. I have only been a field reporter. It’s the only thing I know,” Pelley told the Baltimore Sun in a May 21 interview.

The former mass communications student, who has been with the network 21 years and takes over the anchor desk of the CBS Evening News on June 6, credits his university experience for giving him the foundation he needed to succeed.

A 1975 graduate of Lubbock’s Coronado High School, Pelley attended Texas Tech from the summer of 1975 through the fall semester of 1978.

“At that point I was offered a job at the NBC station in Dallas, the 10th market in the country, so I made a difficult decision and left Tech without finishing my degree,” Pelley said.

Pelley’s work ethic was apparent even in the infancy of his career, as he attended classes while working at the Lubbock Avalanche-Journal and, later, at what was then KSEL television and radio (now KAMC-TV).

Featured in the Summer 2006 issue of The Mass Communicator, the college’s magazine, Pelley said it is extremely valuable to work in the business, in some fashion, during college, although he broke into the business at the much-younger age of 15. He said 16 was the youngest the Avalanche-Journal would hire, so he lied about his age and had his mother drop him off two blocks down the street so no one could see that he couldn’t drive.

“My studies at Tech gave me a solid grounding in the principles, ethics and techniques of journalism,” Pelley said. “I learned writing at Texas Tech. And I learned that ‘there is no such thing as good writing, there is only good rewriting.’ It was at Tech also, that I was able to learn the fundamentals of reporting. I learned the hard work necessary to the creative process.” 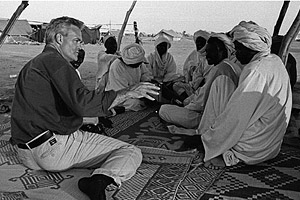 Pelley with Darfur refugees in 2006.

But the mix of paying jobs and classes did not leave Pelley much time to be as involved in campus life as other college students.

“I went to classes until about 3 o’clock or so and then went to work, usually until midnight. Between my studies and my job, I didn’t have a lot of time for student activities but, I fondly remember the film festivals at the student center and the stage plays in the theater. I loved both and dropped in every time I could.”

Even former CBS newsman Dan Rather has pulled for Pelley to be the new face of the network’s newscast.  Rather told Gail Shister for the website TVNewser, “Scott burns with the hot, blue flame to report news,” Rather said. “He’s relentless on a story. He has news in his id, his DNA. He cares about it. He knows it’s important. I think that translates to viewers. They connect with people they believe really care about the news.”

Pelley and his team’s distinguished body of work have received an Alfred I. duPont-Columbia Silver Baton, two George Foster Peabody awards, 14 national Emmy awards, five Edward R. Murrow awards, a George Polk and a Loeb award, as well as honors from the Society of Professional Journalists, Investigative Reporters and Editors and the Writers Guild of America. Twenty-one of those awards have been earned for his work over the past seven years on 60 Minutes.

He was inducted into Texas Tech’s College of Mass Communications Hall of Fame in February 2006.

With the plethora of ways for newcomers to get started in journalism and all types of media, this writer asked Pelley to talk about the relevance of a college education to a future in the industry.

Pelley also was asked to share his thoughts on the relevance of prime time network news in this day and age of everything online 24/7 and so many people choosing to get their news elsewhere; why is what he will be doing still important?

“Regarding the relevance of the Evening News, I find people are tired of the shouting on television news, the veiled opinion, and the dubious information on the internet. “60 Minutes” is by far the number one news program in America. We think that if we apply the great story telling and original reporting of “60 Minutes” to the “Evening News,” then, the audience will find a great deal of value in that. The audience for the “Evening News” is growing. Five years ago, 25.5 million people watched one of the “Evening News” broadcasts, today its 26.6 million. That’s a market we’re excited about being in.”

Then a 60 Minutes correspondent, Pelley spoke at two undergraduate commencement ceremonies in spring 2009.