Cora Lea Emerson receives a grant that will aid in the investigation of declining water resources. 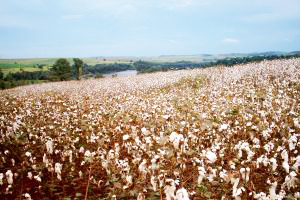 Emerson aims to determine whether more traditional crops can be utilized in rotation with cotton.

A Texas Tech graduate student received a $5,000 grant from the Texas Water Resources Institute, which will help fund the first year of her research investigating irrigation on the Texas High Plains.

Cora Lea Emerson, doctoral candidate in the Department of Plant and Soil Science, will investigate possible solutions to the decline in available water resources.

Cotton is the staple of West Texas agriculture and accounts for a large portion of the region’s income. However, with decline in available irrigation, the agriculture industry faces a number of problems.

“The goal of the study is to determine whether alternative biomass crops are a better choice in rotation with cotton than more traditional crops, such as grain sorghum, or a better choice than continuous cotton given the region's water constraints and increased disease and pest pressures in cotton monoculture,” Emerson said.

Emerson’s proposal said that the efficient use of low levels of supplemental irrigation in such rotations may stabilize biomass crop production, compared to dryland, and provide economic return as available irrigation quantities decline in the future.

Other contributors to the study include Texas AgriLife Research, Texas A&M University System, the International Cotton Research Center administered through the Texas Tech College of Agricultural Sciences and Natural Resources and the USDA-ARS Ogallala Research Initiative.