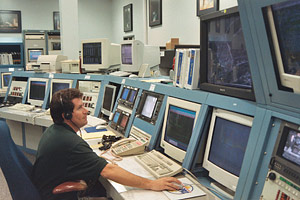 Since March 1991, Tumbiolo has led all weather support for both the space shuttles and expendable vehicles.

After 12 missions to the International Space Station, the space shuttle Endeavour has returned to Earth. This mission’s conclusion is bittersweet for Texas Tech graduate Joel Tumbiolo.

Tumbiolo, a member of the 45 Weather Squadron at Patrick Air Force Base, Fla., is the Delta Program launch weather officer at Cape Canaveral Air Force Station. Since March 1991, he has led all weather support for both the space shuttles and expendable vehicles alike.

“We monitor lightning across the area and ground-wind constraints throughout the countdown, including pre-launch operations, launch countdown simulations, final terminal countdowns and post-launch data analysis,” Tumbiolo said. “Launch day can be very exciting, especially if there is weather in the area.”

Moments before a vehicle blasts off from Kennedy Space Center in Florida, a NASA test director calls for a status check from all flight directors monitoring the various systems crucial to launch. Tumbiolo is among those responding with a “go/no go” for launch.

“We follow a very specific list of safety constraints,” Tumbiolo explained. “If the data meets a certain criteria, launch must be postponed. And out of the more than 200 launches I’ve been a part of, I have probably scrubbed around 30 to 50 of them.” 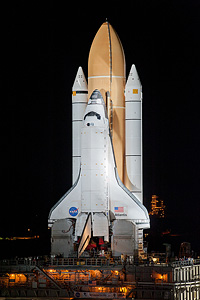 Tumbiolo was lending a watchful eye as Atlantis made its final rollout this morning (June 1).

Tumbiolo received an associate’s degree in geology from Vincennes University in 1981, followed by his bachelor’s in atmospheric science from Purdue University in 1983. And for his master’s, he decided on Texas Tech.

“Several friends of mine went to Texas Tech, and after about a year off, I joined them in Lubbock in 1985,” Tumbiolo said. “I have many fond memories there, and of West Texas. In fact, I still keep in touch with people in the atmospheric science program.”

After graduating in 1989, Tumbiolo became a meteorologist instructor at Chanute Air Force Base in Illinois, which put him on the path that led to his current position.

Once Endeavour cleared the launch tower for the last time on May 16,. Tumbiolo then turned his attention to the last shuttle mission.

Atlantis is now scheduled for that historic final launch July 8, but for now June 1 will go into the history books, as two shuttles are on site at Kennedy Space Center, at the same time. Endeavour glided back to Earth under the cover of darkness, just as Atlantis embarked on its slow 3.4 mile journey to the launch pad, with Tumbiolo keeping careful watch over the Florida skies.

“I’ve known what I wanted to do, since I was a kid,” Tumbiolo said. “I never dreamed that it would lead me to NASA.”