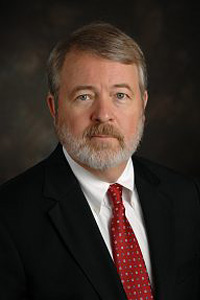 Lombardo, a professor of law at Georgia State University, has published extensively in medico-legal history, with much focus on the history of eugenics.

Though eugenics is associated mainly with the Nazi Regime, many democratic societies also embraced the attempt to improve humanity by eliminating “defective” individuals.

Eugenics expert, Paul Lombardo, will speak on “The Legacy of American Eugenics: Buck v. Bell in the Supreme Court” at 6:30 p.m. June 23 in the Helen DeVitt Jones Sculpture Court Auditorium at the Museum of Texas Tech University. The free lecture is in conjunction with “Deadly Medicine: Creating the Master Race,” a United States Holocaust Memorial Museum traveling exhibit focused that visited Texas Tech in February and is available until Aug. 7.

Lombardo, a professor of law at Georgia State University, has published extensively on topics in health law, bioethics, and medico-legal history, with much focus on the history of eugenics.

Buck v. Bell, a 1927 Supreme Court case, upheld a statute requiring surgical sterilization of “unfit” people, which included mentally handicapped individuals, in order to protect the health of the state. The ruling was seen as an encouragement of negative eugenics practiced in Hitler’s Germany.

Prior to teaching at Georgia State, Lombardo served his alma mater, the University of Virginia, as a professor of both law and medicine for 16 years.

In addition to his career as a professor, he is currently serving as a senior advisor to the Presidential Commission for the Study of Bioethical Issues, in Washington, D.C., and has published two books, “Three Generations, No Imbeciles: Eugenics, the Supreme Court and Buck v. Bell” and “A Century of Eugenics in America: From the Indiana Experiment to the Human Genome Era.”