Supporters celebrate the college's past and future. 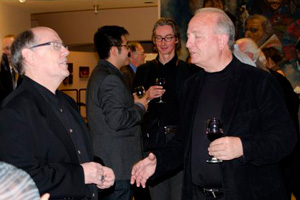 To celebrate the anniversary, the college invited all architecture alumni to a special dinner in April.

Although architecture has been studied at Texas Tech since its doors opened in 1925, this year marks 25 years since the Texas Tech University architecture program was established as a college.

Until 1986, architecture was a department within the College of Engineering, known as the Department of Engineering Drawing. The program was given several different names before faculty and alumni petitioned to establish architecture as its own college.

To celebrate the anniversary, the college invited all architecture alumni to a special dinner in April. The event’s theme was “Then and Now.” Faculty and alumni enjoyed a look at the college’s history and an update on future plans.

Kathy Johnson, director of development for the College of Architecture, described the night as, “elegant, but also very relaxed.”

“It was a great evening,” she said. “We had a very good mix of faculty and alumni. There was lots of laughing and comaraderie.”

The program included a video titled “Conversation with the Deans.” The video featured Nolan Barrick, the director of the program when it was within the college of engineering, along with Dudley Thompson and James White. The conversation was moderated by John White, a current architecture professor at Texas Tech. The former deans discussed the history of the college and its evolving curriculum.

The video also discussed entertaining memories of the program such as cold pizza, hot coffee pots and students pulling all-nighters. Thompson recalled receiving multiple phone calls after he discovered that architecture students were displaying messages in the windows aimed toward the Business Administration Building. He described the incident as the early version of texting.

After the video, Dean Andrew Vernooy offered a look at the future and where the College of Architecture is heading.

Each guest who attended the dinner received a souvenir coin to commemorate the 25th anniversary that displayed Texas Tech University on one side and the College of Architecture on the other.

Johnson said the event was about showing appreciation to those who support the college.

“It was thanking those who were there that evening for giving their support,” she said. “The evening let them know how their gifts are impacting the college.”