A Semester Abroad In Your Own Backyard

For two months, seven students traveled from Texas Tech to some of the most remote locations of the American Southwest. 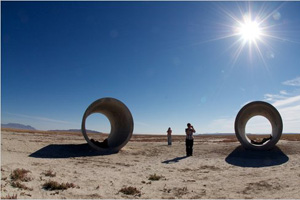 Nancy Holt's “Sun Tunnels” in Utah was a stop the students made during the two-month trip.

For two months, seven students traveled from Texas Tech to some of the most remote locations of the American Southwest. They camped out for much of the fall semester, as they explored natural and human forces that shape contemporary landscapes – ranging from sand dunes and skeletal remains, to baby wipes and bullet holes.

“It’s a semester abroad in our own backyard,” said Chris Taylor, assistant professor in the College of Architecture and director of Land Arts of the American West at Texas Tech.

New York Times reporter Randy Kennedy was raised in West Texas, and detailed the unique program recently in “The American West as Classroom, Art and Metaphor.” The article and several pictures appeared May 4 on the cover of the Arts section.

Land Arts of the American West was founded at the University of New Mexico in 2000 by Bill Gilbert. Harvard-trained Taylor co-directed the program from 2001 until establishing it at Texas Tech when he moved from the University of Texas at Austin in 2008.