The ornament features Raider Red, in honor of his 40th birthday. 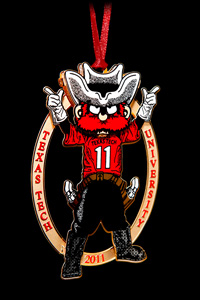 In honor of the 40th birthday of beloved mascot, Raider Red, the official Texas Tech holiday ornament is now available for purchase.

This year’s edition features the 2010 Most Collegiate Mascot in his signature “Guns up” pose to commemorate his induction into the university family in 1971. These handcrafted keepsakes make the perfect gift for any occasion and add a touch of Texas Tech spirit to every home.

The first official university ornament was designed by the wife of former Speaker of the Texas House of Representatives and Texas Tech alumna, Nelda Laney, in 1997. The ornament instantly became a Red Raider tradition that has continued for 15 years. A portion of the proceeds from each sale has been donated to campus beautification efforts, and grants. In 2005, the holiday fundraiser awarded more than $18,000 in scholarships.

All 15 editions of the official ornament are available for purchase at www.ornaments.ttu.edu.