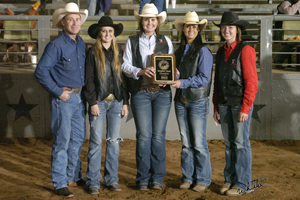 Some 15 colleges and universities across West Texas and Eastern New Mexico competed at the event.

Guthrie, a junior pre-physical therapy major from Rigby, Idaho, took second in go round one in both breakaway roping and goat tying, said Chris Guay, rodeo coach and an instructor in the Department of Animal and Food Sciences. Guthrie tied for third in the finals in breakaway, giving her a second place overall finish. She placed first in the finals to take first overall in goat tying. Ultimately, Guthrie’s efforts won her the women’s all-around cowgirl championship.

Other women’s team members had the following results:

The team of Guthrie and Nelson, along with Kirsten Stubbs, a sophomore agriculture and applied economics major from Eldorado, and Taylor Langdon, a radiology technology major from Aubrey, will advance to June’s College National Finals Rodeo in Casper, Wyo.

The Texas Tech men’s rodeo team finished the competition in third place. In individual honors, Adam Sawyer, a senior agriculture and applied economics major from Bassett, Neb., won the men’s all-around championship placing in both the calf roping and steer wrestling events. He tied for first in the calf roping finals, giving him a fourth place overall win.