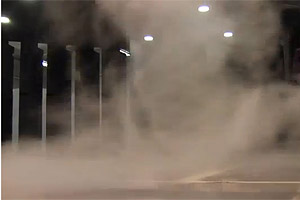 VorTECH simulates how tornadoes do their damage using eight large fans to suck up approximately 160,000 cubic feet of air each minute.

More than 40 years ago, a massive tornado tore through the heart of downtown Lubbock. It left a path of destruction a mile and a half wide, crippling the city. Twenty-six people were killed, and more than 1,500 were injured.

Since then, the Wind Science and Engineering Research Center (WISE) has become the leading research facility of its kind, with a focus on testing wind speed resistance in relation to storm shelters. Recently, they took their research a step further by studying how tornadoes do their damage, with the construction of a tornado simulator at Reese Center, about 10 miles west of the main campus.

Darryl James, professor in the Department of Mechanical Engineering and WISE associate, and his team spent more than a year and a half building the device known as VorTECH.

“VorTECH was designed to simulate tornadic winds in the mid-EF3 range or less,” James said. “Approximately 92 percent of all tornadoes have maximum wind speeds of about 150 miles per hour or less.”

The simulator uses eight large fans to suck up approximately 160,000 cubic feet of air each minute, while 64 strategically placed vanes surround the simulator to create rotation.

The force of the wind is measured by dozens of pressure sensors applied to structural models. The data collected will contribute to understanding vulnerability.

“If we can understand how the tornadoes interacts and damages a structure, then maybe we can develop building codes to improve the safety of homes,” James said.

Texas Tech and Petroleum Engineering are All in the Family