The newspaper was named a finalist for the 2011 Associated Associated Collegiate Press Online Pacemaker award. 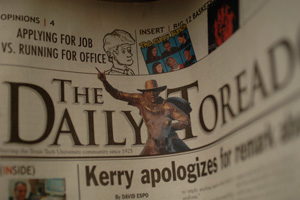 The Toreador, placed in the "20,000 or more enrollment" category, is one of 16 that can win, and was also one of the four newspapers in the Big 12 Conference that were recognized overall.

According to the Associated Collegiate Press, professional judges from the Center for Investigative Reporting selected nominees based on "excellence in content, coverage, breaking news, site design, interactivity, rich media, writing and editing."

The Toreador's editor-in-chief, Kevin Cullen, will finish his sixth semester with the paper in the fall, but before he leaves he said he wants to expand the online content to even higher levels for the next editor.

"I would like to see our website become much more active throughout the day with consistent posts and increased blogging, among other things," Cullen said.

He said an important factor in the expansion of online content is ability to reach as many people as possible in order to showcase the Toreador's work.

"Another large factor in determining the success of our online product is the use of social media, specifically Twitter and Facebook. We have incorporated our Twitter, @dailytoreador, much more this year and that drives people to our website," Cullen said.

He also said he attributes the paper's success to recent changes.

"We launched our newest website version in the fall, which has allowed us more freedom than we had with our previous sites. In addition, we simply have placed a greater emphasis on our online product and pushed our reporters to generate higher-quality content," Cullen said.