Officials acknowledged a private gift from the Chancellor Kent Hance that will provide a majority of the funds. 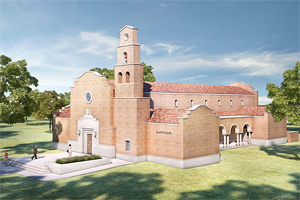 Hance's private gift will allow for the construction of the non-denominational chapel. Click to Enlarge.

The total project cost is estimated to be more than $3 million, with the majority of the funds provided by Hance. The chapel will be named the Kent R. Hance Chapel, in keeping with the university's policy that gifts covering more than half of a building's costs are named in honor of the primary donor.

"For many years, the administration, student body and Texas Tech community have hoped to build a chapel on campus," Hance said. "I love Texas Tech, and I am happy to personally help provide for this chapel, which will enhance the overall mission of the university."

The 250-seat, multifunction chapel will be open to all faiths and support a broad range of religious services, as well as weddings, funerals, memorial services and similar events. Designed to complement the Spanish Renaissance style established on campus, the building will be located between University Avenue and the Merket Alumni Center and is projected to be finished in June 2012.

With the generosity of Hance and others, including the late Margaret Talkington who was also vital in providing funds for the project, no taxpayer money will be used to construct or operate the chapel. The private donations and revenues generated by the chapel will fund its ongoing operations.

"Margaret was a dear friend of mine and loyal supporter of Texas Tech," Hance said. "Her contributions over the years will forever impact our great university."

"We are very grateful to Chancellor Hance for his continued contributions to Texas Tech," said Jerry Turner, chairman of the Board of Regents. "His gift not only will help us reach the $1 billion goal for our capital campaign, Vision & Tradition, but it also will provide a place where alumni, students, friends and family can commemorate important events in their lives."

"Having a chapel will be a wonderful addition to our campus environment, and it will also serve the Texas Tech family and Lubbock community," Hance said. "I hope to one day see my grandchildren get married there."

Hance, a 1965 Texas Tech graduate who became chancellor in December 2006, has long been a generous Texas Tech supporter. In addition to personally providing funds for the chapel, he has also sponsored student scholarships, athletic programs, endowed chairs and many other areas of the university.

"The Board of Regents has a long-standing practice of honoring those who have donated half or more of the cost of a new facility, and in keeping with that tradition, I will call on my fellow Regents to confirm the naming of the Kent R. Hance Chapel at our upcoming meeting," Turner said.