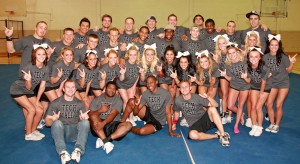 The Texas Tech University Spirit Program has named the 32-member cheer squad for the 2011-2012 season.

A total of 59 students completed the preliminary audition process, with 47 named as finalists. Of those that tried out, 14 females and 18 males plus two alternates were selected.

Alternates are second-year students Jose Campos from Granbury and Hunter Thompson of Leander.

Joshua Anderson, the team’s coach, said the goal of the tryout process is to choose the best individuals to represent the university. Auditions consist of a preliminary and final round. Students had the opportunity to show their sideline talent, such as tumbling and stunts, as well as a pep rally performance in prelims and an interview in finals.

“This is by far the most talent and interest I’ve seen,” Anderson said. “My first year here we had to convince guys to try out, and every male trying out made the team. This year we had more than 30 men at the tryout, making it one of the most prestigious and difficult auditions in the nation.”

Anderson just completed his fifth year as cheer coach, with the team’s national rankings rising steadily at 5th, 5th, 3rd, 3rd, and most recently 2nd, with two years going into the final round in 1st place.