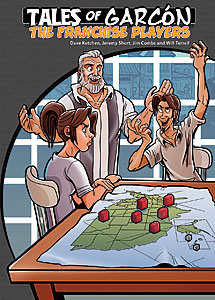 The text is full of very plain-English explanations and demonstrations of business concepts. This time it’s all about franchising – pros, cons, puns and folly.

“You’ll laugh. You’ll cry. Well, you probably won’t cry, but you will get a pretty beefy crash course in business 101.”

Short, along with Dave Ketchen, his graphic novel co-pilot and Lowder Eminent Scholar at Auburn University, just completed the first book in a new series about a family business.

Two previous graphic novel textbooks on management, written by Short, Ketchen and others, feature the likeable character Atlas Black, and relate the story of two college seniors starting their own restaurant. The comic-book-like texts have been widely reviewed and well-accepted in the textbook community.

Success with the original books proved the format’s appeal to college students. Short said the primary goal is to provide a better teaching tool by making the material interesting and entertaining for students. The storyline helps students stay focused and engaged.

“Readers will probably like what we’ve cooked up in Tales of Garcón,” Short said. “What I enjoy most about this one is how accessible it is. Like the Atlas Black series, you don’t need an MBA to follow along. But this book improves on Atlas in that it puts much more emphasis on the story and characters. Atlas was probably 80 percent textbook and 20 percent plot; Tales of Garcón is more like 50/50.”

Short describes the lead character as a charismatic entrepreneur and adventurer.

“We were inspired by larger-than-life figures like the Most Interesting Man in the World from the beer commercials and Charles Muntz from the movie “Up,” without the evilness of course,” Short said. “We took the idea and ran with it, fleshing out a pretty quirky and fun story based on a similar character whose family business is looking to branch out.”

Like the earlier books, Short said the text is full of very plain-English explanations and demonstrations of business concepts. This time it’s all about franchising – pros, cons, puns and folly – as Garcón’s son, who is about to inherit the family hotel, flirts with the idea of expanding through franchising.

“Our focus on franchising and family business targets two huge markets – there are about 700,000 franchises in the United States alone, and 80 percent of all businesses are family-run,” Short said.

“I still can’t believe we’re the only ones pushing this market. The graphic-novel-meets-academia formula just makes sense, and I figure it’s only a matter of time before other folks start realizing it.”

The book published April 28 by Flat World Knowledge Publishers and is available online. 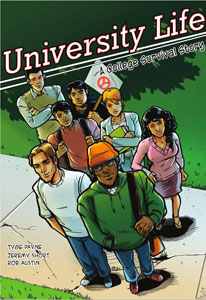 Illustrated renditions of sensitive college experiences and a depiction of a close-knit clique from different upbringings are scenes included in the book.

Not Just For Business

Illustrated renditions of sensitive college experiences and a depiction of a close-knit clique from different upbringings are scenes from a graphic novel textbook created by two professors in the Rawls College of Business to engage students transitioning into college life.

Payne has taught the freshman seminar, Interdisciplinary Studies 1100, three times and each time he said students were reluctant to participate.

“As I taught the freshman seminar class, I was constantly coming against blank stares. I tried to talk about a number of different topics and they didn’t want to get engaged or relate the content to their own experiences,” Payne said.

Short had previously created a graphic novel for his strategic management class and suggested Payne create one for his seminar class. The two collaborated along with illustrator Rachel Anderson, a 19-year-old Lubbock native, and Rob Austin, a Harvard professor, to produce an easy-read text they hope will exemplify college issues such as alcohol, drug abuse and relationships.

“Depression is a huge problem in college students, and a lot of people don’t really realize it,” Payne said. “We tried to touch on the light and dark sides of issues.”

University Life follows six typical characters throughout their first year in college. Payne said he chose six, intending to create a “Breakfast Club goes to college” scene. At the end of the novel the six students reflect on their experiences in testimonial format.

Because the seminar class meets only twice a week for the first eight weeks of the fall semester, Payne said the novel needed to be short and concise.

“You don’t have a lot of time to talk about many things, and that’s the reason we wanted to make the novel manageable within the classroom framework.

Around the U.S. these classes are either one-hour courses or in some cases the seminar is only offered during the orientation for a couple of days,” he said.

Payne also said he believes high schools can utilize University Life as well. Counselors can talk to high school seniors about what they might expect during their first year of college. He said it provides a leg up on the whole process. Payne plans to promote the freshman novel at conferences around the nation in hopes of getting it into as many schools as possible.

University Life comes with a full teacher’s guide to highlight key concepts and questions, which aid in the integration of content into the classroom. The novel was published on April 28 by Flat World Knowledge Publishers. The first chapter is available to read here.