The Cotton Economics Research Institute shows that cotton producers are wary of lower prices in the near future. 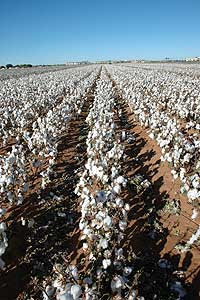 The impact of the one-year Chinese government purchasing price increase on U.S. farmers is only modest at best.

China’s textile mill demand for cotton played a critical role in driving cotton prices to a record $2.27 last month, up 175 percent over the year before. But now cotton producers are wary of lower cotton prices in the near future, according to a report from Texas Tech’s Cotton Economics Research Institute.

The reason: China recently announced a government purchasing price increase both to rebuild their strategic reserve of cotton and increase domestic production. The Chinese government reportedly plans to buy cotton for a so-called “temporary” reserve from Sept. 1, 2011, to March 31, 2012, covering the fall harvest season.

In the new report, “Effects of an Increase in Chinese Government Purchasing Price on the World Cotton Market,” study authors noted that overall it’s projected that a higher government purchasing price in China would increase Chinese cotton imports, Chinese ending stocks and the world cotton price in the first year.

“Whether these effects are sustained over a longer period depends on how many years China will adopt the higher government purchasing price,” said Darren Hudson, Texas Tech’s Larry Combest Chair for Agricultural Competitiveness. “World mill use, however, is projected to decline as a result of a higher world cotton price.”