A website has been dedicated to honoring or remembering Texas Tech graduates who served in Vietnam and Southeast Asia. 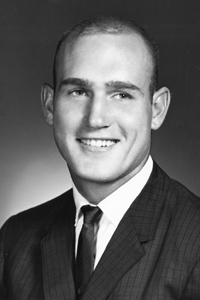 Maj. Samuel B. Cornelius is one of the first veterans featured on the Techsans in the Vietnam War site. Read more about him here.

Since 1775, more than 1.2 million Americans have sacrificed their lives in the nation’s conflicts. In memory, Texas Tech Vietnam Center and Archive launches a new site to honor Techsans in the Vietnam War.

Amy Mondt is the reference archivist for the Vietnam Center and Archive overseeing the project.

“Our goal is to have a site dedicated to honoring or memorializing Texas Tech graduates who served in Vietnam and Southeast Asia,” Mondt said. “Ideally we would like to have a page featuring a biography and photo of every graduate who served.”

Anyone can nominate a veteran for this program. The only requirements are that they served in Vietnam from 1960-1975, and graduated from Texas Tech University, either before or after their service.

To nominate someone for this program fill out the Biographical Submission Form, and email it along with supporting images to vietnamarchive@ttu.edu.

If the Vietnam Center and Archive already has documents or images of an honoree in its collection, they will be included on the honoree’s page. Submissions received without any biographical or supporting information will be added to the site as a graduate who served, but will not be given an individual page.

Participants are encouraged to donate original images and documents to the archive, so that they may be preserved with materials received from other graduates and friends of Texas Tech.

Founded in 1989, the Texas Tech Vietnam Center is one of the largest collections of Vietnam-era related documents in the world. Only the Pentagon has more material on the Vietnam War.