The new species' origins probably trace back to a dramatic marooning after glaciers receded and sea levels rose. 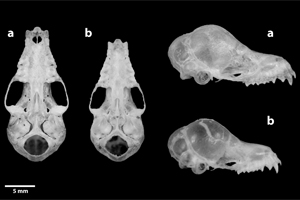 This photo shows the size difference between the new species (A) and its closest relative from Tobago (B).

At first glance, the bat captured in St. Vincent looked like a common type found in South America.

But after closer inspection, Texas Tech biologists discovered a new species found only on the Caribbean island and whose origins probably trace back to a dramatic marooning after glaciers receded and sea levels rose.

The discovery was made by Peter Larsen, a post-doctoral research associate in the Department of Biological Sciences, and Lizette Siles, graduate student of zoology. It was featured in the online version of the peer-reviewed journal, Mammalian Biology.

As a way of honoring St. Vincent’s inhabitants, the researchers said this new species of the genus Micronycteris has been named after the Garifuna people – the blended culture of Carib, Arawak and West African peoples that trace their ancestry back to St. Vincent.

Larsen said he went to St. Vincent in 2005-2006 on two expeditions with a team of researchers seeking to categorize bat diversity on the island.

“We didn’t know at the time when we caught these particular specimens that it was a new species,” he said. “We thought it was a species that had been described already in South America.  A year or so went by, and I happened to look at this species that we had collected and compared it to what we thought it was – a species from Trinidad. But the St. Vincent bat was huge comparatively speaking.”

Larsen gave the sample to Siles, who is an expert in Neotropical bat morphology. After looking at the teeth and the skull, she determined the bat from St. Vincent was distinct from its closest South American relatives. Though the mainland relatives are smaller, often small animals grow larger and large animals grow smaller when introduced onto an island.

Siles said that though the island effects on the body size may have played a role in this example, the species on St. Vincent is genetically distinct and has species-level differences in body type, which is how the team determined that the bat was a new species to science. 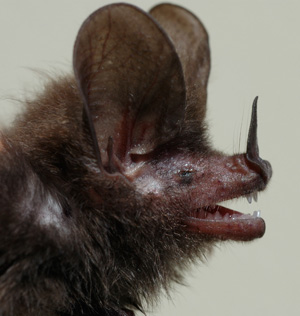 After looking at the teeth and the skull, it was determined the bat from St. Vincent was distinct from its closest South American relatives.

“Its size was the first clue,” she said. “It’s a very large bat in body and skull size compared to its mainland counterparts. Also it differs in specific skull and teeth characteristics. The lower incisors are a lot larger than they are wide. That’s completely different than the one he thought it was. At the base of the skull where the ear is, there are supposed to be two wells. Those wells are very shallow. On the mainland species, they’re very deep.”

The new species came about fairly recently, the researchers said, probably sometime in the last 600,000 to 1 million years. Prior to this, the bat’s common ancestor from the South American mainland managed to island-hop across to St. Vincent when sea levels were much lower.

The marooning likely occurred during the Pleistocene, after melting glaciers caused rising sea levels that isolated the St. Vincent population.

Siles said the bat is mainly an insect eater that will roost in caves, trees and even logs on the forest floor.

However, the animal has an uncommon method for catching prey, she said.

“They can actually pick their insect prey off the surface of rocks and leaves,” Siles said. “Not all insectivores can do that, because most insectivores catch their prey on the fly. Their big ears, wide wings and membranes between the rear feet and tail allow them to maneuver better.”

To see the report, visit this site.