They've got spirit, yes they do, but wait – they're sea animals? 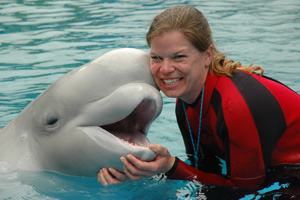 Dees has trained a beluga whale to whistle using a “guns up” prompt.

They’ve got spirit, yes they do, but wait – they’re sea animals?

Tricia Dees, a Texas Tech alumna, has trained a beluga whale, a California sea lion and an umbrella cockatoo to perform their behaviors using a “guns up” prompt.

Dees started working at SeaWorld San Antonio as a diver in the aquarium in 1999, the summer before her senior year.

“The day after I graduated I drove down to San Antonio and have been here ever since,” Dees said. “I’m going on 10 years.”

She said her favorite part of the job is getting to know the intricacies of all the amazing species SeaWorld has at the park.

Animals are always learning, said Dees, and training is part of their enrichment at SeaWorld.

“We train husbandry behaviors, such as going on a scale or lining up poolside for a sonogram,” she said. “This allows us to take great care of them.”

Dees said they do behaviors just for the sheer enjoyment of playing with the animals.

“I love every time I see a guest with Double Ts on,” she said. “I will have them ask for the behavior if I have that particular animal out with me.”

Having Texas Tech fans in the audience is always enjoyable, but Dees said she particularly loves getting a Longhorn or an Aggie fan to ask for the behavior.